ARGH! I'm on deadline and totally forgot to write this post! Forgive my tardiness!

Every year, when October rushes in, leaves crinkling underfoot and skies graying with the promise of rain, I know it's time...TO GET MY SPOOK ON! I love all things horror, and Halloween fits right into my aesthetic. So each year...alongside the parties and trick-or-treaters there are several things that we do here at Casa Henry to make the season blight.

We have tons of Christmas decorations, most people do, but it says a lot about us that we have just as many Halloween knicknacks, wreaths and lights. Little known fact, in one of my incarnations, I was a manager at a halloween store and with that comes a discount. So on Oct. 1st, we open up the Halloween closet and let it puke all over our house. 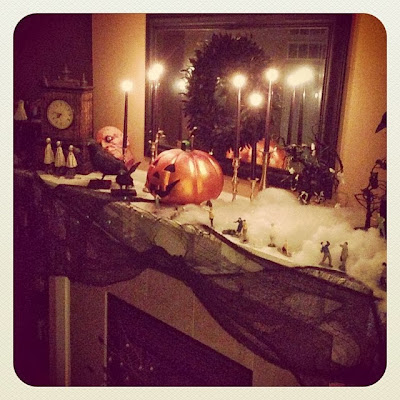 The image of families trudging through soggy pumpkin patches might exemplify the season for many, but in my mind, those same spots are much more suited for a nighttime visit.  A lot of corn mazes (around here anyway) set up scary events and pull out all the stops. Pulling in broken down school buses, loading them with ghouls and having you claw your way through. The only place a jump scare belongs is in real life. In movies, it's just lazy.

In the last couple of years, TV has made a huge turnaround when it comes to horror-themed television. A few of my favorites return this time of year. But I'll focus on two. American Horror Story: Coven and The Walking Dead. If you haven't started watching American Horror Story, know that it's not set up like a traditional series. Each season stands alone with the actors taking on new roles and operating within a new premise. This time it's witches and its definitely the most accessible of the three seasons! LOVING IT. The Walking Dead is just back and already feels like it needs some added freshness, but that said, it's leaps and bounds one of the best shows on television so jump on the train before the zombies get you! 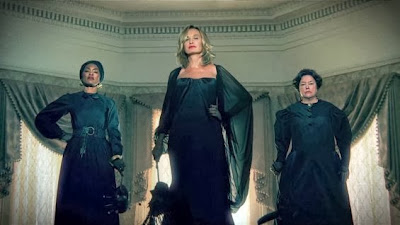 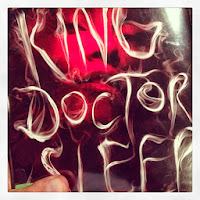 Duh. You're probably thinking, Mark has to say that shit, he's a writer, it's in his contract. But no. There's nothing in my contract...and might be the scariest thing of all (sob). Every October, I dump whatever literary fiction I'm currently reading and gather a stack of nasty horror to get me in the mood for...dismemberment. This year, I decided to read The Shining and its sequel, Doctor Sleep, back to back...and I haven't been disappointed. Stephen King is still the master and the growth of his writing is stunning from that third book, to Sleep, his newest.

Above all, every year, during the entire month of October, my wife and I make it a point to watch as many horror movies as possible. Now, we're aficionados, so we've seen as many as 750 at last count, but there are still so many to take in. A few of our favorites that we rewatch a LOT. (The Shining, of course, Suspiria and Halloween, which is required). I'd love to do a top ten post about all my faves so I could supremely geek out for y'all.

That I'm so obsessed with this grim holiday will come as no surprise to anyone who's already read my books and my latest, PARTS & WRECK (Nov. 25, available for pre-order now, from Entangled: Covet) is a romance inspired by some of my horror favorites. But don't worry, lightweights! It's a comedy! Here's the blurby:

Wade Crowson, a brutish and brooding playboy and veteran vivisectionist for the Parts Department, runs into more than he bargained for in new partner, Lucid Montgomery, a quirky beauty with a bizarre secret (an imaginary friend that has lingered since childhood) and a string of psychiatric diagnoses she tries very hard to keep secret. Loving Luce will stamp a demonic target on her back and thrust Wade into a frenzied whirlwind of hilarious misunderstandings, blood-spattered bathrooms and, quite possibly, a stripping gig for empty-nesters. Can their love withstand the savagery of an exorcism (with or without the split pea soup)?

And NOW! The Contest.

As part of All Entangled Eve (click on the link in the sidebar for more giveaways), I'm giving away a copy of a pair of Entangled eBooks! Simply enter via the Rafflecopter thingie below for a chance to win!

Anonymous said…
I'm subscribed to your newsletter. :) I left my e-mail in the box.
8:51 AM

Becky LeJeune said…
Yep, I'm subscribed to the newsletter as well :)
8:54 AM

Heather Hand said…
I am subscribing! Love Halloween but not the scary parts - I love the chocolate & the smiles.
11:44 AM

Rhianna said…
Was really stoked to see you had a Covet title coming out, Mark. Can't wait to read it. :D
11:49 AM

Unknown said…
I love horror stories. I'm so glad I discovered you have a contract with Entangled! I subscribed to the newsletter. I'll be following you closely.
1:01 PM

smiles said…
Subscribed! So cool you guys get as into Halloween as most people do Christmas :)
12:50 PM

Ashfa said…
Subscribed to the newsletter as sprigoferns AT yahoo DOT com
3:37 AM

Shadow said…
Hi! Happy Halloween! I hope your having an awesome time! This hop is a blast! Great post! Thanks for sharing and for the awesome giveaway!
shadowluvs2read(at)gmail(dot)com
11:02 AM