Not really. No alcoholic fugues or anything, just a long one. But tons to report.

Saturday was Crypticon, which was fun though woefully underattended. Doubly sad, because for the horror fan, it was a cornucopia of movie stars, or at the very least, solar flares.

I didn't really know what to expect, the cons I've attended so far have been of the large scale variety and the last time I was at the Doubletree in Seatac was Norwescon. That con topped out at 3000 attendees at last count and the halls were packed with people.

Crypticon? Not so much. In fact, when we showed up, the place was empty and about 5 people were in line at registration. Spoiled, as I am, I skipped the line and asked a staffer where "pro check-in was". She just stared and pointed at the line. Which was quick and everyone was very nice, just new at the whole thing (like me). The panel I'd prepared so hard for, The Year in Horror (yes, I actually prepared this time) was listed in the program as TBD. An insert listed it correctly but didn't identify the location. I know. I know. Growing pains. First year of the con. Got it.

While we waited for the panel at noon, we toured the expo area. Dear God. I hate to say it, because they were all very nice people, but it was like a celebrity hospice center. I can't be certain but the only person in there with an active career was Tony Todd (Candyman, Chuck). Again, I could be wrong.

Now, that said. I, much like cmpriest, was a bit gaga over William Davis (the Cigarette Smoking Man from the X-files) and Ashley Laurence (Hellraiser) is stunning in person, absolutely beautiful. But I was most excited about the ladies from Friday the 13th. So much so that I reverted to awkward teen years and walked right on by without saying a word. Pathetic.

So, it was 11:30 and time to find the room. When I asked where it was at the info/registration desk, they had to look it up. None of them knew. Bad sign. When I got there, it was a huge room, capable of accomodating an easy 150 member audience. Here I am riveting the crowd with all my internet-derived horror knowledge... 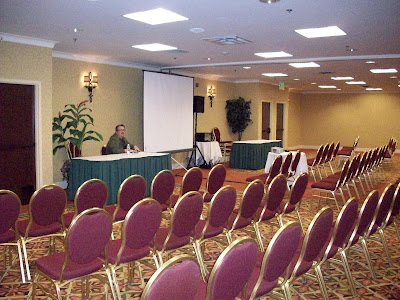 How impressed are you?

Had a good time talking with Michael Montoure, my co-panelist, and Caroline provided for our heckling needs. So it wasn't a total loss.

Went antique shopping, after. Seattle has this massive warehouse antique store by Safeco Field (the Mariner's stadium) and we're always looking for more of our china, which is old and rare (which says less about our taste and comportment than it does about our luck, since we found a setting for 4 for dirt cheap and haven't seen another plate since). Anyway--what would one of my posts be without some potty experience--I had to pee, so I was directed to a bathroom in the auction house. I knew I was in trouble when I opened the door and a blast of noxious gas raped my nasal passages.

There was only one way to describe it: old man shit. It's distinctive; It's deadly.

I gagged. Literally gagged. It got so bad I had visions of Caroline busting into the room and finding me curled up fetal and rocking under the sink.

But enough about near death experiences, because the rest of the night was awesome. Dinner with friends and their cranky new baby, who hummed and snarled but didn't cry (bonus!); then Ladytron and Datarock at the Showbox.

I didn't know much about Datarock. Listened to them a bit on youtube and didn't care for them, so I was pleasantly surprised that they were really entertaining and pumped up the crowd. Loud as hell, though. Ladytron took the stage and were amazing. Songs that I was lukewarm about on the album absolutely rocked live. Plus, there was this couple--actually I think they were friends of different sexual orientation, by which I mean gay speaker dancer and his frankenstein-shoed hag (I say it with love, so it's okay)--that were so entertaining, not since Elaine on Seinfeld have I seen such spectacularly ill-conceived moves. We loved them. We didn't love the princesses with cell phones and no boundaries. Here's Ladytron's latest video, so you can feel like you were a part of it all (except for the fabu dancing, sorry)...

As we were leaving, we noticed the Lusty Lady--our favorite adult movie theater (notable for their fun marquees)--was showing INDIANA MOANS AND THE TEMPLE OF POON. Come on. How can you not love that?

And Damn. I'm going to have to break this post up. I thought for sure I'd be able to get it all in, but my fingers are tired and I still have to go grocery shopping.

Wait 'til you hear about Sunday (with pictures of Mrs. Voorhees!)

Joe said…
Oh man...I'm loving this post so much. Mainly because I know how it feels to be that guy looking out at all those chairs. But it's the Temple of Poon reference that just puts it over the top. Bravo.
7:05 PM

Mark Henry said…
It's all for you, Joe!

Actually, you need to set up a livejournal account.

I'm still cross posting but my daily traffic over there is upwards of 300, so I'm not sure how much longer I'm going to keep this up.
1:23 PM