Donut Post...or Doughnut, For That Matter

Which is it "donut" or "doughnut?" After all, it is made out of dough, so the latter seems likely. But they aren't nuts, per se. So maybe it's all just nonsense. Anyway, I'm done worrying about it and the research would bore me to tears. So let's get on with the post.

I've been to donut Mecca.

I was chatting about this with my Yahoo group awhile back, as I'm wont to do. But here's the story for all of you. Last week, when I accompanied Richelle and Caitlin to their reading/signing at Powell's--if those two don't need a chaperone, no one does--I was firmly mid-Atkin's induction and thus carbs were a no-no. But being out of state, one loses a bit of motivation. Alcohol does not help the situation.

Well, on many occasions, I've sought out the comfort of a warm donut (I probably should have used the other spelling for that sentence, lest I give the wrong impression). And in Portland, there is a place. A place where the icing flows like manna from heaven onto bulbous pastry so tender you'd sock your moms. What's even better? The recipes seem culled from the depths of MADNESS!

The place is Voodoo Doughnut.

I've attempted to make my acquaintance with this locale many times, always to be denied. I didn't think this particular night would be any different. So, to my surprise, following much debauchery at a Portland pool hall, my companions and I were driven to Voodoo Doughnut. Which was open (as it is 24 hours a day, unless you're really jonesin' or are me--in many cases-- and then it will be closed mysteriously).

Under the cruller chandelier we made our selections. 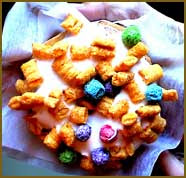 The Cap'n Crunch--though it could have easily been called the Cap'n Crunchberry. Dear God what diet could survive in the presence of such glory? It was delicious. Raised and fluffy and covered a thick slathering of pink icing and an avalanche of forbidden breakfast treats. Ummm.

I just gave myself shivers.

Caitlin opted for the Double Bubble (not pictured). A decision, she insisted, made entirely based on the Double Bubble gum protruding from the center of the delicacy. I don't know much about the flavor, but her jaws were smacking, so I'm certain it was a success.

Richelle had to be dirty and ordered herself a Dirty Snowball... 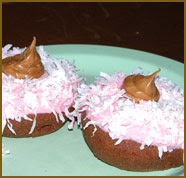 I'll have you know, the woman ordered that one sight unseen. I was half expecting something yellow to pop out but the donut turned out to be far more enigmatic (yes, I think that's a dollop of gooey peanut butter protruding from the hole, if you catch my meaning.

I'm not saying there's a sexual connotation to the name "Dirty Snowball" but there is another donut that might clear up the issue... 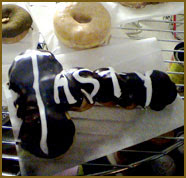 Do we need to even continue this line of discussion?

There were so many weird donut varieties, I thought I'd have an aneurysm, or maybe, someone has jammed the pretzel into the voodoo doughnut's head... 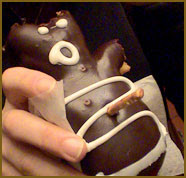 It could happen, you know? Anyway--and I can't stress this enough--the next time you're in Portland, do yourself a favor and cheat on your diet at Voodoo Doughnut. You'll be happy you did...and bloated.