Holy crap! Have I not posted since Monday? Something's wrong with me. This schedule is making me feel old. I layed down for a nap yesterday at 3:00 and woke up at 6:30. I never do that. Never.

Of course, I didn't get a whole lot of sleep the night before. That was Tuesday, and so I'll start there.

I was hoping to begin my day by pimping out my favorite urban fantasy chick, Stacia Kane (Personal Demons), but as it turns out, she told me to hold off as the book isn't shipping yet. That made me grumpy. I know how good it is and I can't wait for everybody else to know, too. But, I relented (kinda).

Next up, Caitlin and I met up to get up to Seattle early for the Jim Butcher bacchanalia. Also to catch up with Lisa Lutz (The Spellman Files), who was signing at the Seattle Mystery Bookshop, only we got there 5 minutes after she left, so I'm a big loser. So we goofed off in downtown a bit, Caitlin signed some books at Synde's Barnes and Noble where the endcap is gloriously Team Seattle, we had sushi at Todai, which was great except for the Philly roll (lox and cream cheese) grossing me out. 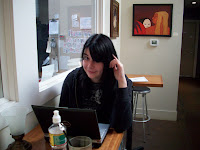 Then it was off to Victrola for actual writing. That's Caitlin over there doing just that (or at the very least blogging about facebook). By the way, those metal stools were hard on the ass. I'm just sayin'. Luckily the folk art paintings of blood-thirsty bunnies made up for the discomfort and possible hemorrhoids (also known as piles, which conjures up so many images, I'll keep those to myself--for now). Anyway, got some decent work done on a zombie skin care infomercial for the opening of American Minions. Caitlin likely thought I was insane as I often giggle to myself while I'm writing, but she was nice enough to keep her judgments to herself.

By the time we got to the Butcher shindig, it was packed. We ended up packed into chairs in the Mystery section, with this awesome view of Jim... 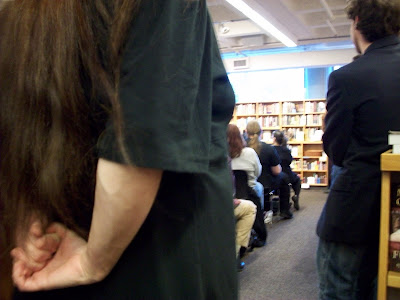 Oh...I meant NO view. Ah, well at least we had fun cracking jokes with Synde and Jeff, a new guy who hung out with us the rest of the night. It's nice to find people who can overlook the fact that we're generally unpleasant. Thanks Jeff! 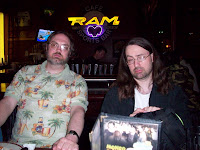 The store closed and Jim had to sign a mountain of books, but we did end up going out to dinner with him and he showed us the totally awesome first edition of the Dresden Files comic (on his laptop), which is amazing (the comic, not the laptop), beautifully drawn and has a really fun kick-off story. Jim was fun, talkative and by midnight, looked as tired as I felt, so Caitlin and I drove him back to his hotel.

So, yeah. A late night, followed by an early morning--he dogs are trained to go outside at 7 and once they're up going back to sleep is out of the question. So I dragged ass yesterday, didn't do a damn thing I'd consider productive. What I needed to do was...

1. Mention that Mario Acevedo has taken over the Barnes and Noble Paranormal Book Club, so hit that shit hard and often.
2. Pimp out Rachel Vincent's Rogue, Rayo Casablanca's 6 Sick Hipsters (review coming soon) and Ekaterina Sedia's anthology Paper Cities, which I'm super excited about reading (I pimped Missy Ilona's Magic Burns over at the League, along with a farewell note).
3. Let people know about this super cool event that's going down in Olympia (click to make it bigger)... 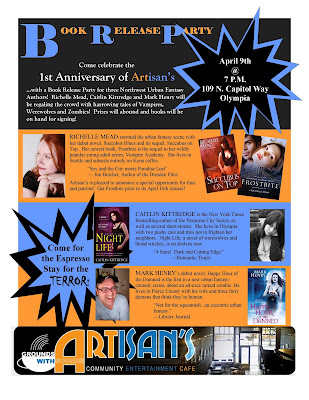 Let's file this particular flyer under the glamorous life of a debut novelist, because guess who had to create it? My publicist? No no. Hehe. That'd be me. So if you're in the area, or have a car and are willing to put some miles on it, we'd love to have you. Plus, Artisan is the one with the best red velvet cake evah!

4. Remind people that Happy Hour of the Damned is the League book club pick and today we're talking about spoilers. Come for the gut gravy, stay for the witty repartee!