I'm exhausted, withered and flaccid, just generally, not down there...or anything, though I haven't checked. I could be completely immasculated for all I know--too tired to look. The sizzling estrogen of so many Romance and PR fan is soaking through my pores, I've felt a nagging sense of Regency...I mean urgency to get out of here and explore the City of Steel. A recharge from all the metal skyscrapers might restore my dwindling testosterone, to dip into a phallic reference. But before I go there, lets take a trip on a jet plane...

Like I said, Caitlin pulled up to the house at 3:15 (that's AM) and we drove to the offsite parking for Seatac, which turned out to be the Best Value Inn and Lighted Parking (thank you internets), I half expected to kick the dead hookers out of the way to get into the office, luckily they were only passed out.

Flight 2 was where the magic happened. Here's a clue... 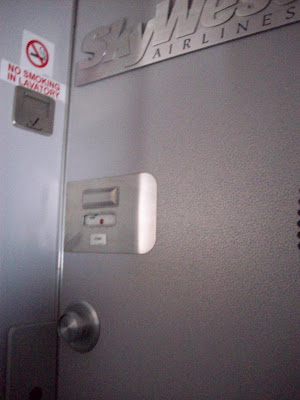 How close do you have to be seated near the bathroom to could a shot like that? Pretty close, we were in the last row of coach and desperately wished that the passengers would prefer to take a first class dump, sadly no...coach dumps for us. Why does this happen to you Mark, you ask? Because I'm...me. Luckily, I'm creative and crafty. Here I am sniffing wetnaps to get me through the hard times. 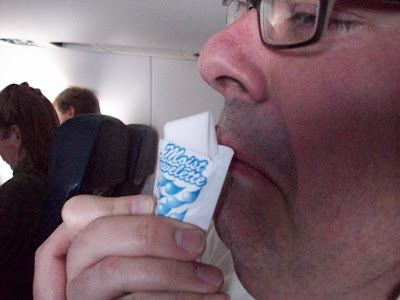 And no I'm not cutting onions, those eyes are near tears. Bless my heart.

As if we didn't we weren't busy enough fighting off the ass attacks, yesterday was tax day. We were lucky enough to get off the plane in Pittsburgh and walk right up to an airport post office. Taxes sent and nearly an hour before the PO closed, too. Who are you calling a procrastinator?

The Hilton, wouldn't you know, is under construction, though our room is nice and quiet, so I can't really complain...nope. Can't think of anything other than the main convention area is a tad claustrophobic. Got to meet lots of cool folks: Jeri Smith-Ready, Jeanne Stein, Patrice Michelle and Ms. Jackie Kessler of the sexy demons. Food, drinks, more food followed. Plans were made to meet up again at 8 in the morning.

What time did I get up? 8:20. I was freakin' wasted, I won't lie--the Caipirinha was like drinking Nyquil on the rocks. Not drunk mind you...wasted. I felt like crap. Three hours sleep only takes you so far.

So Richelle spread guilt through a text to my phone and I was off with the swag for a stuffing party, registration and Martha Stewart style basket creation (oh yes, I gots the pride). I'll post a picture of the majesty later. The test-tubes of genuine zombie plague won't last the day. I've refilled the rack three times, and it was dwindling away quicker than my hair follicles. Lucky, I've got the postcards. Did I mention that the pens didn't show up on time. Oh yeah. No Mark Henry pens. 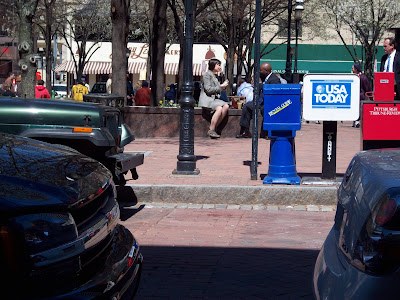 At this time, Caroline and I were busy forcing Primanti Brother's Pittsburgh Cheesesteaks into our gaping maws. Unlike the Philly variety, these babies are loaded with french fries and slaw. Gullet-friendly is the verdict.

Pittsburgh has a real eastern block before the fall feel with plenty of steel buildings and utititarian architecture hovering over old stone churches. It's really quite interesting and beautiful, but...hey, I wanted to be an architect when I was a kid and am still infatuated, a bit. 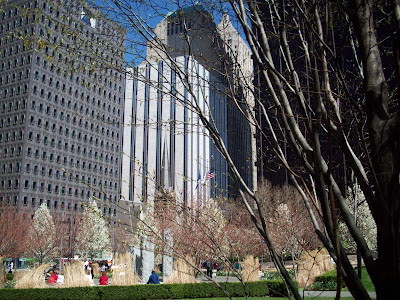 That's by Mellon Bank (for the few Pittsburgh natives on my f-list). 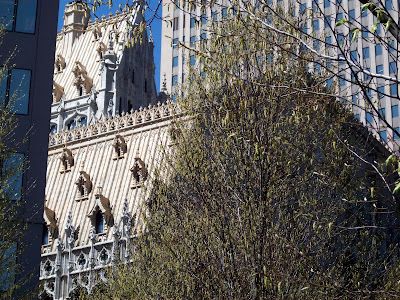 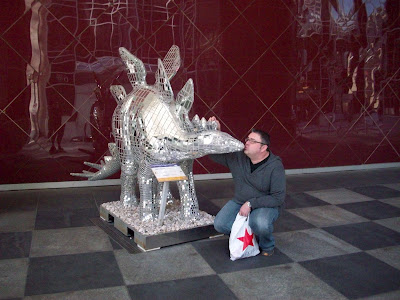 Disco Stegausoarus, I love you most of all! This guy was in this superweird black glass plaza with a roof like castle turrets (spelling? I almost thought I'd spelled Tourette's, which would have forced me to use various slang terms for vagina. How could I not?).

Anyway, next up is the Fangs, Fur and Fey meet up and some Ellora's Cave party which should totally have a uterus theme, unless someone missed the metaphor.