It's 9:30 and I've been up since 7:00 watching a retro 60s production of Mozart's comedic opera Cosi Fan Tutte by some Berlin company. It's really quite interesting. Oh...Jesus. Who am I kidding? I'm too lazy to turn the channel. I can see the remote sticking out between the cushions on that chair over there, but it's just a few feet too far away. You know?

Frankly I'm surprised I'm not just exhausted but hung over after last night's reading/signing after-party. But I'm getting ahead of myself. Let's start at the beginning.

Caroline and I met up with Caitlin Kittredge to carpool up to the University Bookstore. We promptly began pumping each other up with claims of superstardom and threats of diva-like behavior. I ended up taking my book to dinner, because I really had no idea what to read, ultimately, I ended up falling back on my Chapter 3 standby. Gang bangs, butt plugs and F-bombing on par with the London blitz = perfect reading fodder. As a special shout out to my best friend Kevin, I also chose to read Gil's British date rape scene. That decided, we were off to the University Bookstore.

Holy crap! There were a lot of people there. 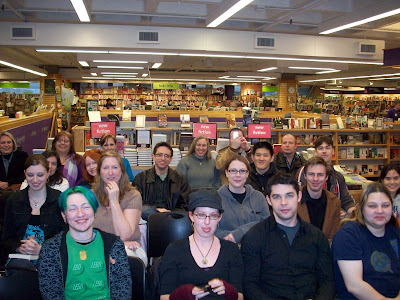 That's about half of them. There were actually people sitting on the floor and some people standing on the sides. We counted between 35 and 40, depending on who you ask. The reading went well. I was told later that I actually got a gasp from someone not expecting my zombie heroine to bite a bitch. A furreal live gasp. I couldn't be happier.

Caitlin read in a British accent, even. Which was fun and gruesome (the story, not the accent). Then we took questions and gave out glow in the dark zombie finger puppets. Good times all around.

Let's see who was there.

Dianna Rodgers and Devon Monk came up from the land of Oregonia just to see me...and make a pilgrimage to John Fleuvog. But guess what Dianna made? 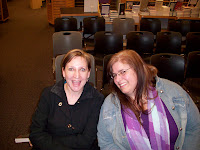 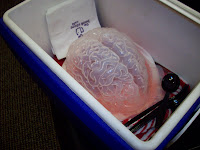 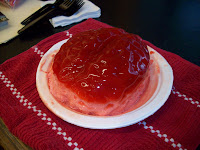 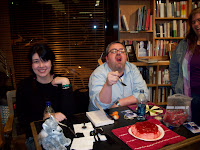 Aw hells yeah. That's a big brain jello shooter (I can still smell the alcohol). That last picture is my fifth spoonful, so I was well on my way to lit. I couldn't have been more surprised or pleased to be consuming brains at the reading. We shared with the audience, of course, some of whom weren't aware they were doing vodka shots. The stunned faces were priceless.

The signing was awesome, I sold out my stock, which seemed like at least 25 copies, Caitlin signed at least that many, if not more. It was great. But wait...what's this? 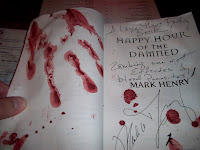 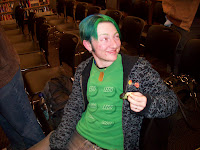 A gore spattered crime scene Happy Hour of the Damned? I quivered in ecstacy. C.S. Inman (that's him in the green) was the perpetrator of this, my favorite atrocity .

Here's some more peeps, including my friends who thought they'd escape my rampant bloggery. 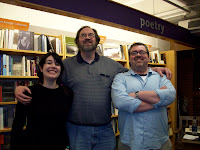 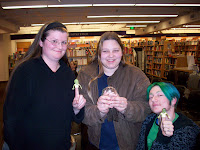 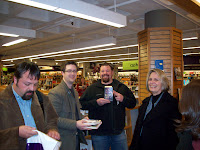 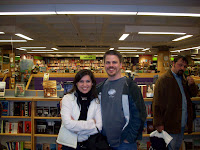 They were wrong. The tall guy in that first pic is Duane the magic man behind this whole shindig. If you don't know Duane, you don't know scifi/fantasy.

That's all. Must go recover.