I've been collecting interesting anecdotes from my first week as a published author, mostly good stuff, but there have been weird, shall I say sinister, turns. Take for instance... 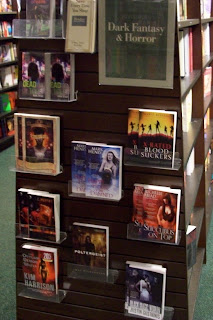 Last Wednesday, being the diligent sales tool, I am, I embarked on a journey of book store drive-bys. For those not in the know, this is where an author hops in his filthy compact car and sputters up and down the freeway, searching for book stores that aren't ambivalent to us debutantes, where he (me) might sign whatever copies they have on hand. It might be an awesome experience, like the one Synde and her friends at the downtown Seattle Barnes and Noble bestowed on me (I'll let the camera speak for me on this one, except to say that she even gave me a cushy brain stress ball) or it could be... less than awesome, like when an independent bookseller looked at me like I was fucking nuts. Lets shoot for a reinactment...

"What's that?" She glances over her horn-rims at the glossy Happy Hour post card I'm passing to her.
"Oh just a post card with information about my book, in case you'd like to carry it in your store." I slip the card between her hesitant fingers, where it's turned a few times and handed back.
"I don't think so." She pauses, looks me dead in the eye. "We only carry bestsellers."

I swear to God. I couldn't make up that bit of horror. Thank God for the brain stress ball.

At the Northgate Mall B&N (which is like the most beautiful, modern bookstore in existence), I walked up to the info booth to ask for assistance--like you're supposed to--and they were awesome, and super nice. So much so, that while I'm signing stock, I hear this over the loudspeaker, mind you I'm in desert storm print cargo shorts and an old hoodie, at least two days of scruff covering my jowls.

"Ladies and Gentleman, if you'll please direct your attention to the center of the store, we have debut novelist, Mark Henry, signing his book Happy Hour of the Deaf. He'll be there for a while so swing by and chat with a real live author."

Did you catch the key word? Oh...yeah. Stop giggling. Deaf. The manager, who was walking back from the music area and presumably the source of the booming voice, looked at the title, spun and raced back the way she came. I'd finished signing by this point and was putting the little signed stickers on each of the books, when the voice boomed again.

"Damned! Happy Hour of the Damned...is the name of the book and Mr. Henry will be with us for awhile to chat and sign copies," he finished as I set the stack back in place on the front table. I couldn't help but chuckle when he yelled "Damned," though cuz, c'mon. Since, no one even flinched through the announcement--there was a distinct feeling of indifference among the customers--I thanked the manager and high-tailed it out of there.

In Bellevue, the nice info desk girl couldn't find my book anywhere. The computer insisted, "In stock." But alas, nothing...nada (are you tiring of my ellipses?). So, I thought to myself, where is the worst possible spot for this to be shelved? It didn't take long to come up with an answer.

Sure enough, it was sitting in the new release Romance shelves faced out and missing a good 4 copies. I can just hear those mortified returns--I don't need to remind anyone that this isn't romance, right? In fact, Library Journal has dubbed it "splatter fiction" and "not for the squeamish." Two comments I, myself, love, but a romance reader might be looking for something else.

Anyway. All this leads me to this afternoon.

We're having a book release party at my house, because this isn't the city, the house will have to do, plus there'll be plenty of shadowy corners for people to vomit and/or make out. It's--duh--zombie themed, so today, I picked up Caroline from work and we went to order the cake. Can I just say...

WTF? The government needs to stop worrying about regulating oil prices and take a look at the skyrocketing cost of party cakes, cuz Jesus! $70 people! And I didn't even get what I wanted, should have left, but that's my own bullshit and the topic for a never ending analysis that always ends in self loathing and very little insight, so...

I asked the woman for a brain cake. B-R-A-I-N. Gray matter icing deco on an otherwise round red velvet cake. Not too much to ask, you say? Well apparently, you're wrong. First off, I thought she was going to puke up her lunch on my shirt. Her politically correct eyes sprang open wide and dramatic, you'd think I'd left my SUV idling at the curb, coughing pollutants into her otherwise green existance. She said she could do it, but it was going to require a second tier to mold into the hemispheres and that was going to cost upwards of $150.

I told her, "I'm not planning on marrying it, can't you just design a flat image of a brain on the top?"
"It won't look right without the 3-D effect, so...no."
"Well then maybe you could make it look like an autopsy slice, just a sliver of brain draped across the top, all veiny, but ultimately flat."
"I won't do that. That's disgusting." She didn't blink. Her solemn judgment was not comfortable, I must say.
"Hmm. Did I mention this is for a zombie book." I started to shuffle.
"Doesn't matter. Did I mention I'm doing a cake for the Governor in two days?"
I began to fantasize about a mix-up in the cakes and Mme. Gregoire slicing into a bloody mound of brains.
"How about something more cocktail themed?" I suggested.

So there will be no brain cake at my party and I am full of hate. Won't someone boost my self esteem?

Joe said…
You're a genius. You don't need any brain cake to tell you that. Wish I was on your side of the continent for the party.
4:30 PM

Mark Henry said…
Thanks. I'm frankly greatful for all the humiliation, without it, I'd have nothing to blog about at all.
10:26 AM