A White Elephant Ten Years in the Making

We're trying something a little different with Grow Jesus this week, before I go completely mad, jump in there with my robe and a fake beard and get banned by the Catholic League, I think we'll try to give J a boost with some warm water. I have it from leading authorities (my friend Matt) that if Jesus is still hard--and if we've learned anything from The DaVinci Code, it's that that was a distinct possibility--then he's not nearly as swollen and engorged as is possible.

I'd post a new picture but his lack of growth is downright shameful. So instead, let me update you on my whirlwind week.

On Wednesday we went to see Ms. Tori Amos, who might as well be family. I've been in the same room with her more times than with some of my cousins, so...

Tori's new album is one of those concept thingamajigs that's so hot with the kids right now...oh wait...what was that? No it's not. In fact, while the album, American Doll Posse, may be some of the songstress's best work, something about Tori's persona Pip, rubs me the wrong way. You see Tori recorded the album from the perspective of 5 different characters (Isabel, Santa, Clyde, Tori and the aforementioned Pip). The other four are close derivations of Tori's regular style which is piano driven intricacy, Pip, on the other hand wants to be a rock star. During the tour, Tori's been rolling out a different character at random for each of the concerts. I told my wife and our friend Jo, who was along for the show, that I'd rather open a vein than see Pip walk onto the stage for the Seattle concert. 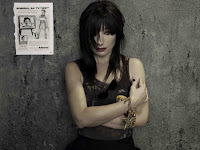 Who do we get?

For the first half hour of the show, Pip would rather hump the stage, and dance (poorly) rather than play her piano. I was not surprised in the least. This is my luck.

I'm applying for a patent.

The rest of the show was great, red wigged Tori came out and was awesome for nearly another hour and a half, and since the show wasn't on the schedule for an authorized bootleg, she did some cover songs (Smells Like Teen Spirit, Rattlesnakes, I'm a Believer-weird, I know). Any way here's a clip from the show...

Saturday, like a phoenix from the flames of procrastination I had an epiphany. I have this pesky homeless guy character that needed a special purpose*. Found it! I'd been hung up on his shit for days.

Then, later that night, at our yearly Christmas party white elephant exchange, I chose wisely! I think you'll agree. 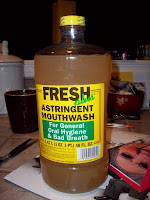 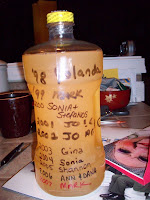 This little treasure has been making the rounds for the past ten years. Don't be jealous, you two can start this most amusing of holiday traditions. Start with one bottle of dollar store mouthwash (you'll not that this astringent variety is FRESH, much like my old school dance moves). It also happens to signify a year of prosperity for the one who possesses it for that blessed year. Does this mean bestseller, folks?

I don't know. But the good luck has already started, cuz guess who got a grillz lollipop all gift wrapped and purdy?

* Steve Martin reference c/o The Jerk and a brain full to the brim with useless pop culture references.

Jaye Wells said…
It's not just fresh, it's Fresh PLUS. Now with formaldehyde!
5:51 AM

Mark Henry said…
Frightening, right? Every year it gets cloudier. One year it had green specks floating in it and then they went away by the following party. What is that shit?
6:35 AM

Jaye Wells said…
"What is that shit?"

What they don't list on the label is the product was originally called Soylent Green.
2:31 PM