Zombies to Aisle 9...Clean Up!

So...it came to pass on that 21st day of October, in our year of the lord, 2007, that the dead rose to their feet and dined on the flesh of the living, washed it down with Starbucks and shopped for organic produce and cute handbags. There I was, roaming Fremont and resisting the allure of fresh-baked carbohydrates, when a low grumbling rolled in from the east. An odd slobbering sound befitting only those least sentient of creatures, zombies.

Then they crested the hill...(I happened to have a camera*)... 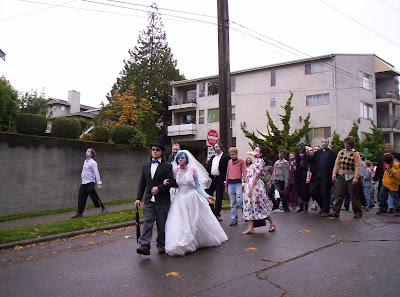 Fresh from a wedding reception, apparently. 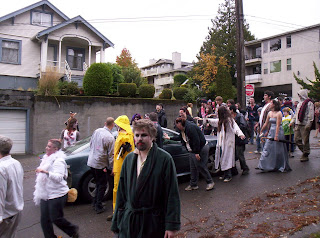 Some frightened bystanders managed to get to their car and attempt an escape. Unfortunately, as they are wont to do, zombies mobbed the vehicle, broke into the passenger window and dragged the helpless people to a nearby picnic table where reunion-style consumption ensued (side dishes were conspicuosly absent, as were ants, though seasonably understandable). And, yes, before you ask, maggots were in attendance. 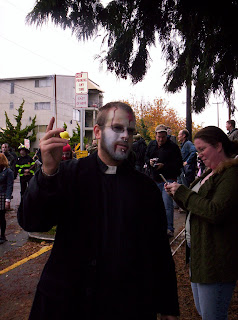 As luck would have it, camera flashes stunned the living dead allowing me to bring you this close-up of the ghoulish nuptial officiant. A thoughtful priest, even in death, Father Death carried sticks of incense to cover his less than pleasant aroma.

Before long the hoarde of about 150 corpses swarmed the Fremont shopping core, stopping to browse the gorgeous produce at the PCC Natural Market. Little known fact, zombies are drawn to organic produce for it's color and odor, rather than anti-oxidant value, plus shopping is an innate human factor.

Here they are proving the fact, in this stylized yet scenic shot... 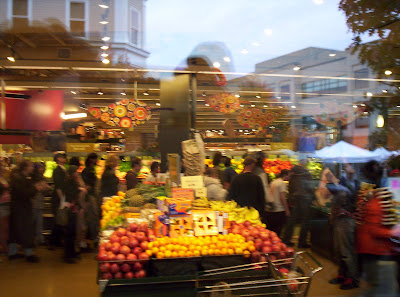 From there the undead shambled through the Fremont Sunday Market, browsing and snacking on the assortment of sweetbreads. It was an all you can eat zombie buffet, and good times were had by all!

*Camera-toting writers do not imply agenda!