What's it been, like 4 days since I've blogged? It's like abandonment. I'll report myself to the proper authorities once I've brought you all up to speed.

Friday was an awesome writing day. Funny stuff leading into over the top action sequence--my favorite combo, next to lull the reader-lull the reader-SCARE! Anyhow, I'm super happy with that chapter and continued to make progress throughout the weekend. 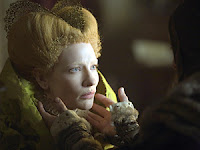 Saturday, we went to see Elizabeth: The Golden Age, which despite starring the always amazing Cate Blanchett seemed like so much rehash. Probably because of the Helen Mirren HBO miniseries, that I totally dug. Regardless, good times and shopping surrounded. I got a new frying pan, which is totally uninteresting compared to my new iTouch. F*ck yeah! I've been playing with it ever since. Damn thing has me locked down like Sybil Danning in Reform School Girls, except for the whole penis thing, which really throws off the simile. Damn!

Sunday got weird. It started off normal enough. Caroline brought work home, so I took her to my favorite writing spot/coffee house and we both wrote. While there we got back to back invites, first to dinner at a friends, and second to drinks in Seattle with some local writers and an east coast celebrity scribe (how's that Tiffany?). Dinner with friends included the most garlic ever introduced to a caesar salad. By the time we were ready to leave for Seattle, the fumes were rank and hung around like a cloud. Embarassing? Possibly. Uncomfortable? Nah. After all, it's really the others who'd suffer, we couldn't smell it, soooo....

We parked at a garage (pay attention to that piece, it plays a big part later) near said author's hotel, met up with the rest of the glitterati to stalk the city streets and seek out libation and conversation in the fields of the lord (Gameworks). I haven't been to the place since it opened, and it's a cavern, but on a Sunday, tragically devoid of objects of ridicule. Tiffany is an awesome gal, and her book, In the Serpent's Coils (Hallowmere)

needs to be on your bookcase whether or not you're literate. Don't be ashamed, just check it, bitches. Oops--it's YA--I mean: CIO SSOB!

It's after leaving the group that things got harried. The doors where we expected to go back into the parking garage were closed for the evening, directing up another two streets through the bowels of the convention center tunnel. Before you ask, yes, there were angry youths in our path, but they were only mildly threatening so we trudged on. At the top of the steepest hill that could be arranged, we entered a completely different parking garage, where we were directed by the attendant to attempt a quest through the bowels of hell itself to get back to our car. It took us 45 minutes, climbing over barriers, roaming through two different building lobbies, riding two sets of escalators, and two elevators. When we finally got to the car, the attendant was running down the ramp and told us we'd have to wait for him to get back. A woman was standing by the kiosk yelling into her phone that she was going to call the cops. What the f*ck! Seems she lost her car and the attendant went to go find it. Crazy.

Anyway, eventful weekend. Now I've got to go write something I can get paid for. Outtie!

Tez Miller said…
Caroline writes too? Two writers in one marriage... that's absolutely madness, and you two are very brave for surviving it ;-)

Mark Henry said…
God no. She writes reports and performance evaluations of her banking employees, that's all. We're not completely insane.