Would Somebody Bumbershoot Me?

Yesterday, we went to Bumbershoot, and whatya know, it was a great time. For those who don't know the area, the Seattle Center--which hosts the musical festival--was a World's Fair-grounds (this is where the needle's at). Normally it's open from any direction, but during Bumbershoot, they fence off the entire place, which must have taken weeks. Crazy. So, I think I've told you before that it's a capital A Arts and Music festival, kind of like Lollapalooza, only instead of three or four stages, there are like twelve or so. It incorporates art exhibits, film, comedy, literary events, vaudeville, and some of the biggest bands around.

We started the day off at Experience Music Project; Natalie Portman's Shaved Head was playing the Sky Church. It was packed, and this was 12:30. NPSH put on an awesome show blending Devo, ABBA and the B-52s into a new party band for the texter-set. From Sophisticated Side Ponytail, to such classics as Mouthful of Bones and Male Facial Hair, Natalie rocked the house with "art fag" bravado. Did I already say awesome? 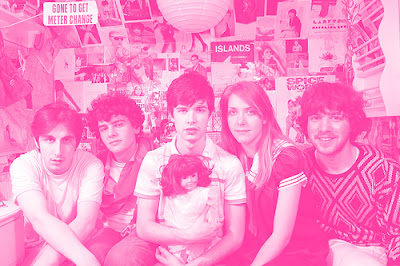 Then, we cheated on our diet, while we watched Black Rebel Motorcycle club southern rock the crowd. I'm not proud. But, shit, it's been a month. We dawdled too long and were shit out of luck for the Janeane Garofalo set, which sucked so bad we had to eat Shiskaberries and catch the Alabaster show at the exhibition hall. They sucked dog dicks so hard. We barely got through song before darting. 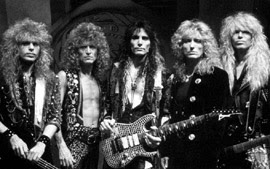 Question: Why is it all "alternative" sounding rock bands have a "normal" singer and a back up "demon-voiced" singer? The answer is...because they're not alternative. In fact, those bands--along with the rap-rock hybrids--are this generations butt-rock. My Chemical Romance is the new Whitesnake, people. Accept it.

Follow along. The 80s retro radio stations play The Cure, The Cult, Echo & the Bunnymen. You don't hear a lot of Whitesnake. Because that shit sucked. But back in the 80s, there wasn't a radio station within earshot playing The Cure, The Cult, or Echo, unless they were broadcasting from a college basement. That music was underground for the most part.

Still think AFI is alternative, or even *cough* Goth? Nope, just Tesla with a jet black dye job. Nothing to see here folks. Just move along.

I got a little carried away. Plus, we were bitter when the Horrorpops cancelled. Who could resist a ska/punk mash-up inspired by zombies? No one, that's who. So we wandered through the art exhibits (but not Miranda July's, there was a line), where I became enamored with the art of the mysteriously named Parskit. His work is characterized by blank-faced phantasms carrying out mundane but creepy tasks. All of these paintings were sold. Sigh. I can't even find anything about them on the internet. I fear I may have imagined them.

We queued up for the Kristen Schaal/John Coulton/Anthony Jesilnik show at Intiman. They were all awesome. Kristen Schaal presented a short film that had me laughing so hard, I nearly seized up and shot a kidney out my ass. Jesilnik was just plain wrong, and John Coulton's humorous songs, despite being cute, were just not my bag. What was awesome? Doug Benson MCed, fresh from elimination at Last Comic Standing. We love him.

Next up was the female hip hop dance troupe Decadance at the Bagley Wright. The first half of their performance was high-energy and awesome. It was when they forced us to endure Stravinsky's Firebird that I nearly opened a vein. I turned to Caroline to suggest we leave, but didn't want to wake her.

The night concluded with two acts, I'd have never paid for if it were just them: Sean Paul and the Dutchess, herself, Fergie (seen below in all her incontinent glory). 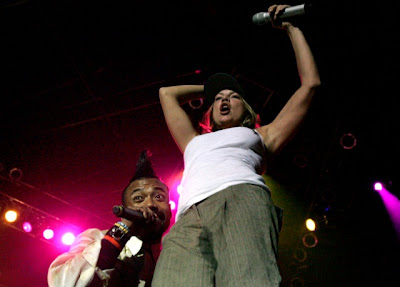 I've got to give it up for the Black Eyed Peas' songstress her voice was great. She even channeled Ann Wilson for a cover of Barracuda that was surprisingly rap-free and pretty rockin'. It was during this song that I saw a woman tumble down the cement stadium stairs, she was NOT okay. The EMTs came an worked on her for a half hour, which is a good sign. Poor thing. They could have sent the fun directors.

The next hour was spent driving 150 feet from our parking space to the street, which is always fun.

All in all, good times.

xjennersonx said…
"They sucked dog dicks so hard. We barely got through song before darting."

Ouch. Probably the worst review we've ever gotten... thanks for giving us a chance just the same. Believe me I was pretty pissed about the Horrorpops canceling.. I was looking forward to their set.
10:16 AM

Sorry you had to read that, and to your credit it's hard to tell whether my aversion was to Alabaster or the Exhibition Hall, which has the worst acoustics I've ever experienced.

I tend to write in massive exagerations and my readers (all 20 of them are used to that). On the upside, even bad reviews are good promo! Plus they thicken our artistic skin.

xjennersonx said…
No worries, I have come to understand that with being in a band, not everyone is going to like you. And I'm alright with that, as much as I wish everyone did like us with how much work we put into everything. But it is nice to know that even with getting a review from someone who didn't like us, they can be understanding, as you have been to us and can apologize for such remarks. Give us another chance some time.. It was probably mostly the Ex Hall's fault, that place is gigantic.. the biggest place we've ever played for sure..
10:28 PM