Fairgasm, or Gross-out, You Decide

I had a great time at the fair, ate too much, rode a variety of torture devices, and sucked at rigged carnival games--damn you meth-mouth carny! But I expected all of those things. What keeps me coming back, year after year, are those freaky moments.

Like this sexy blonde bull, that just moments after the flash went off for the picture, flipped it's long hair like a drunken panty-less socialite. You go Bull! 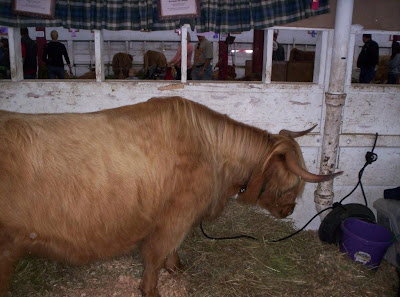 Just around the corner from Paris Longhorn, a line of children meandered past a stable scene. The star, a plastic cow.

A plastic cow. What made this particular plastic cow a must to commemorate? I think it might have been the heaving silicone utter bag. I forced my Goddaughters to partake. Then upon achieving the photo op, started to feel icky. Was it the blue skim draining into the bucket, the bored 4H teen droning on about the milking process, or the image of my Goddaughter, D, straining to crack a smile? Who knows? I don't think I need to tell you that shortly after we were at the handwashing station, getting rid of the remnants from that floppy germ factory.

Afterward, D and I hit the extreme rides, to experience what our food goes through in the cuisinart. On the El Nino, I was tricked by the sneaky teen ride attendant thusly...I was slightly larger than the padded yoke that clamps you to the ride like a frog in a wax tray, so he came up and made an exaggerated exhale. Before I knew it, I'd mimicked him. He pushed the restraint in a couple more clicks so the rest of the ride was breathless. Literally. Nothing says carnival ride like brain damage. Thanks sneaky teen!

Next up was the new product expo. I never actually buy anything from these booths, yet I'm magically drawn to them. What could possibly force me to wedge myself between the mothers carting around their lazy children in plastic wagons like fat little sausages and the glut of overweight people on Little Rascals? 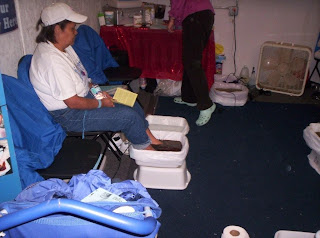 The first is the detox booth. This little gem was shoved under the grandstand, oddly enough, right across from the scones. I hope there's no connection, there. Though I kept looking from one to the other. Apparently, the detox equipment both leaches impurities from your body through your feet, and diagnoses medical concerns. So, these poor people subject their feet to some nasty snake oil for get this, $35. Insane. And, no. That is not my diarrhea. 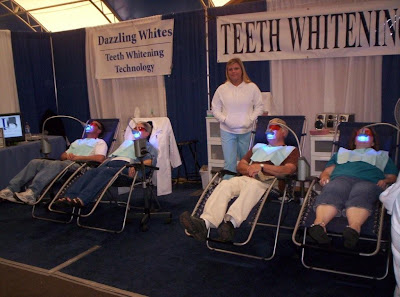 ...is this a dentist's office.


Ever had the desire for Zoom whitening with an audience? Yes? Well the Puyallup fair is for you. My favorite thing is that the attendant's clearly posing for this picture.

So with all the eating and walking, riding and photographing, what's left to do? That's right. You know. And luckily the recepticles were clearly marked. 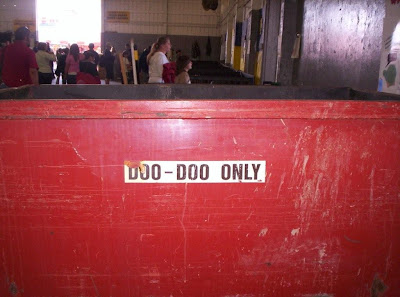