We're digging back into the seventies for next week's horror movies, but first let's finish our exploration of that magical horror year: 1980.

Motel Hell is the kind of movie that warps children's minds--thank God. It's a sweet blend of horrors and humors, wrapped up in a natural casing that snaps right along. It's one of the first movies I'd seen to mix up the two genres. I was spellbound, and not just becuase the flick starred Porkies' own Beulah Ballbreaker.

I think we all know what's in that secret garden. It ain't fritters.

The next one, Humanoids from the Deep, has more tits and ass than Porkies, but sadly none of the fine acting (ta dum dum). I remembered watching this on pirated HBO as a kid, the shock waves dragging the image all over the screen. The preview here does a good job explaining how stupid the premise is. Enjoy...

Terror Train ended Jamie Lee Curtis's reign as Scream Queen, and you'd think after earning that kind of honor she'd acted in many horror films. Nope. Just five. After the Halloweens, she joined directer John Carpenter in the most underated horror film ever, The Fog (which has to be seen in wide screen to be truly appreciated), then Prom Night, and then this twisted flick...

I heard that a remake was in the works, but it turned out to be an entirely different movie. How could they recapture the magic of the original. They'd have to pull together Criss Angel and Rhianna, to match the star power of David Copperfield and Prince Protege, Vanity. Not going to happen. You go Terror Train! 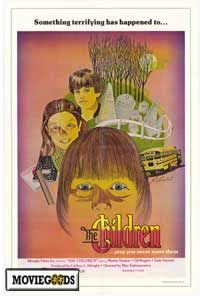 The first time I skipped school was in the 7th grade. I'd tried before like we all do, pretending to be sick but all that got me was a trip to the doctor (yeah my mother actually followed through on that threat). When I was actually sick and stayed home, it was worse. Reagan was shot on a sick day. An airplane crashed into the potomac on a sick day. Prince Charles and Lady Di got married on a sick day. All horrifying. I started to make the connection. My illnesses were creating tragedy. There was something about staying home that was hurting people. I made a decision. I couldn't take any more days off for being sick. That was that. The Children made me skip again (but not at home). I left for the bus a little early, telling my mother that I would catch the bus at Tom and Kim's stop. She naively agreed. When I got to Tom's the movie had just started. His dad was a bus driver and left for work early, his mother was asleep. We tried not to scream.

I couldn't stop watching. Little zombies with acid fingernails, who could?

See? Who could? Who?

Stacia said…
I love The Fog. Have they released that remake yet (which I don't plan to see)?

For extra fun--although it's not really scary--listen to any film commentary with Kurt Russell and John Carpenter. They stop even pretending to watch the movie after a while and just chat and giggle, while we hear them light cigarettes and open cans of beer. It's a good time, man.
4:34 AM

Mark Henry said…
Joe: you're right, they show every single scene in those trailers. I'm having fun with the 30 second TV spots, which show so little you get no clue what the movie's about.

Stace: my wife and me are all about The Fog. So when the remake came out, last year I think. We hopped on it. So awful. I mean really retched. You should almost watch it just to see how bad the story was butchered. It's shocking.
5:20 AM