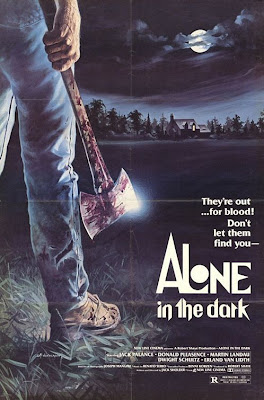 Well, I do. Alone in the Dark was one of my teenage favorites; it starred Jack Palance, Donald Pleasence, Martin Landau and the A-Team's Dwight Schultz in a surprisingly humor free role.

The setup: New psychiatrist is introduced to a handful of psychotic criminals (Preacher, Fatty, The Bleeder and Jack Palance) in a electronically locked ward. The psychos think the new shrink killed their old one. The power goes out, and so do the schizophrenics, out to find and kill the new shrink and his family.

This one was no mere slasher flick and the twist at the end is pure Craven homage. Plus, it's got a scene at a punk night club with the Sick Fucks, doing "Chop Up Your Mother" that's so funny.

Here's the opening clip, I think it stands up.

Mark Henry said…
I think it's the addition of the 4th insane knive wielding killer that gives this film, that extra special something.

I've already got something rolling around my noggin' for next week, I'll bet you haven't seen that one either.