Please to Give your Opinion...

On the hottest night of the year (so far-knock on wood), my wife and I fell asleep by the drone of the TV. It was tuned to VH1 Classic, BBC Jewels and an old Siouxsie and the Banshees concert. You see we are wayward goths, set free of obsidian dyes by chemical intolerance (not really, I just liked the way that sounded). Anyway, Siouxsie sang Hong Kong Garden, and I didn't remember it being quite so catchy. It jostled me from slumber. I wanted to hum, but there was another reason for my interest. An idea had sparked.

...and then I went back to sleep, and forgot.

Today, I found the video, and the words started. 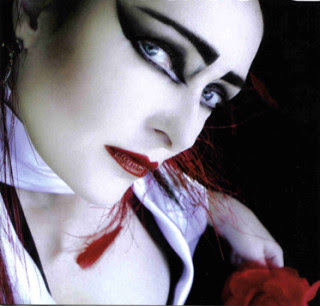 So here's the opening of my untitled, Siouxsie Sioux-heroined, urban fantasy, set in the early '80s.

Somewhere in the middle of our set at the Limelight—Hong Kong Garden, I think—I noticed a young man staring over his fist, a bump of ketamine balanced in a pile on his knuckle like an infected mosquito bite. His eyes were glazed and baggy, a look that wasn’t helped by the quarter inch of eyeliner he couldn’t resist applying. Beside him, a Victorian mortician's daughter, all aged lace and pained corsetry, let off a faint glow from skin so pale it could have been paper.

At the end of the first chorus, out of habit more than any sense of showmanship, I reached out and pushed over the mikestand. "Chicken Chow Mein and Chop Suey," I sang. "Hong Kong Garden takeaway."

My attention returned to the couple. Not that they were particularly odd in a crowd so tragically dark, both in clothing and demeanor. But there was something. The boy's eyes were fluttering. K-hole, I thought. But, the girl had slid in close to him, flattening against his hip, his torso, and in just the time it took to look at my feet. So fast.

Then, his body stiffened. Sharp. Pain driven stiffening, as though a shock coursed through him. And the girl? She gnashed her teeth...

There's more, but here's the video:


So two questions. I love the idea of using a real celebrity as my main character, fictionalizing them. I understand that I'd need to pay for any lyrics replicated, but as I know nothing of Ms. Sioux personally, would I be held to any legalities in creating an urban fantasy heroine? Is there any interest in an urban fantasy set in the '80s?

Stacia said…
I don't know about the legalities, but I'm pretty sure by making the heroine the actual Souxsie, you're relegating yourself to fanfic. Make her a Souxsie tribute band star and you're good (and it's more interesting to me, anyway.) JMO.

And at first when you described the guy's fluttering eyelids and the girl getting close and the way he stiffened I thought...uh...that there was some hand action happening under the table.
1:16 PM

Mark Henry said…
She'll probably just be based on Siouxsie, but I'm kind of stuck on that specific time frame. I love the idea of setting an urban fantasy in the music industry.

As for the fluttering, there is hand action going on, it's just not between his legs. Imagine a puppet.

Mark Henry said…
Oh...and Stace? Don't think I didn't notice that you outclicked on myheritage. You are so tagged!
1:56 PM

Joe said…
So Siouxsie finds herself in the midst of some kind of early-80s brain-vampire goth cult imbedded somewhere in her own goth following? I like it. A lot.

Can certain songs/lyrics manipulate the behavior of the subcult? Even though she doesn't realize it right away? Was the scene itself responsible for the creation of these things that gather at her shows, growing there like mushrooms in the dark? Not the hallucinogenic kind, the deadly ones.

Mark Henry said…
In much the same way John Malkovich played himself in Being John Malkovich, Siouxsie will be sucked into my fictional post-punk Cthulu cult!

She may never escape.

It said I look like Rosanna Arquette, Melissa Joan Hart, and a number of Asian ladies, which was a little confusing but hey, not unflattering. I'd rather look like them than Fish-Lips Arquette.

Mark Henry said…
I did Caroline's (wife) and it came up with Rob Lowe. She wasn't impressed. Although, she had the highest percentage of facial recognition points 90% Renee Zellwegger, which I thought was cool, yet she simply screamed "Squinty-eyed bitch!) My highest was 80% Peter Sellers.
2:28 PM

Anonymous said…
how do you embed the neat youtube window in your blog? can't figure that out
1:47 PM

Mark Henry said…
When you're posting, do it in edit html mode rather than compose. Go to the youtube site and grab the embed code, paste it into your post and publish.