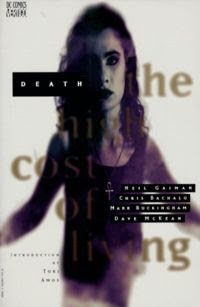 A tidbit nicked from Undented…

Neil Gaiman fans will be especially glad to hear that Neil says he’s now working with director Guillermo del Toro on a potential “Death” movie, based on Neil’s character from Death: The High Cost of Living, Death: The Time of Your Life and Sandman:

“Everything is moving, slowly, but it’s moving… Guillermo del Toro is executive producing, which is a wonderful thing… and I’m actually planning on going out to Prague very, very soon to do some stuff with Guillermo on ‘Death.’ I think it definitely seems like it’s going to happen.”

A while ago--at least fifteen years, I call it my comix period--I snapped up the first series of Death: The High Cost of Living, SIGNED! Needless to say, I never opened them. I'd considered having them framed for my office. Now, it's a certainty.

Is anyone else freaking out about this movie?

Speaking of film, we went to see Knocked Up, last night. I'd heard good things, but wasn't expecting the movie to be nearly as charming as I found it. Something about Seth Rogan, maybe his normal guy looks and banter, took what could have been senseless comic bullshit and elevated it to a really smart film about female/male compatibility. Check it out, but don't expect 40 Year Old Virgin humor.

And, totally not in keeping with our regular movie watching cycle, we saw Pirates on Sunday. Let me start by saying: I hated Pirates 2. I think I even fell asleep. The new one's not half bad. There are some interesting character additions and the sets were amazing. I was particularly taken with the fantasy version of Singapore. It had my mind racing about an indo-chinese horror story. Anyway, the movie wraps up the series nicely, with just enough humor to keep it interesting (Thanks primarily to Geoffrey Rush).

Anonymous said…
I loved The Devil's Backbone. Doesn't del Toro's upcoming movie about the haunted (?)orphanage kind of sound like a retread of TDB? Regardless, I'll probably end up seeing anything he does. He's so super talented.

The most recent movie I had a chance to see was Repulsion (on dvd of course). It was a nice little disturbing film, in its own way.

I wish I could share more, but my list of movies I have to see is becoming way too long. I have free tickets to that reportedly disasterous Spidey movie, and I haven't even gone yet.

Glad to hear you liked Pirates 3. I haven't seen 2 yet, but I think it's going to be a guilty pleasure. *name drop alert* My husband and I are friends with Mauro Borrelli who did the concept art for Pirates 2, so I want to see it for that reason as well.

Mauro just had a film he financed & shot himself called Haunted Forest released by Lionsgate and some other company. It's totally low rent and rips off every Japanese Grudge/Ringu type movie, but not a total waste of time if you see it for free. My husband did an uncredited polish on the script. Not that that really means anything. Ok, enough with that.

Rambling here, but I really want a good movie about the Flying Dutchman. Could you imagine what del Toro could do with *that*?

Mark Henry said…
If you get your Flying Dutchman flick, I want a Jersey Devil movie.

Is Office Space not the most hilarious thing?

Haven't seen Repulsion, but I'll check it out. Burnt myself out on Fulci after our last movie talk.

I'm excited to see anything Del Toro blesses, but the new one does echo of Backbone.