On with the show, an event so pooptacular it has to be thinned out and spattered over five days, so all you greedy f**kers will have to make do with two days at a time.

Day 1: From the Ghettos of Lakewood to the Shores of Skinhead Lake

That's Lakewood, Washington, for those in the know, the other is Coeur D'Alene, Idaho––I never actually saw a skinhead there, but who am I to interfere with stereotyping. The drive was the same as it always is: boring. This is our second time across Eastern Washington, which despite our state's nickname is NOT evergreen, but desert-lite. An odd source of inspiration, it did spark some interesting ideas about dust devils and flood plain Krackens.

We made Coeur D'Alene in 6 hours and checked in to the Red Lion at Post Falls. We never actually saw a falls but the river was adequate. I have to say, if I were a judger…oh…wait…never mind. The front of the hotel looked like the projects. It just did. I was nervous about checking in, even, but it turned out to be fine. Coeur D'Alene is a big lake surrounded by a boozy college town. It was packed. We ended up in the outskirts for dinner, an Italian place called Tomato Street, which was actually pretty good. They offered my favorite eatery time waster the paper tablecloth and can of crayons. We didn't have the camera with so might I offer you this quick recreation of the aftermath: 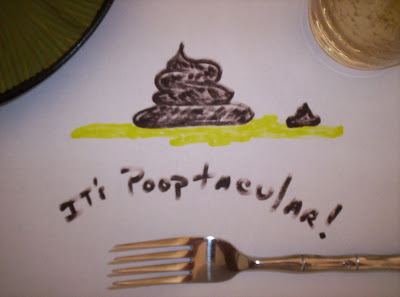 What would have to happen? That's right the pseudo-post-adolescent waiter had to catch me. It went like this…

Waiter: "Did I catch you drawing something naughty?"
Me: "It's a turd."
Waiter: "Awesome. More water?"

The best bit is after he left, my wife unveiled her own drawing of a turd. She had it hidden under her sly little hand as if that deuce were an ace.

The town is also the home of our niece, so we made our appearance and sped off to the casino ($80 down). On the way back––windy tight road––we got a taste of night in the country. This kind of dark may be perfectly acceptable to y'all country folk, but we were a little freaked out. It was the definition of pitch black (cue Vin Diesel), just nothing, and no stars either, disturbing.

Day 2: Over the Hills and Through the Woods to…to…Where the Hell are We? 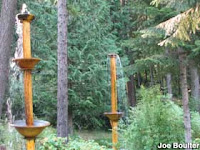 Okay, so did you love that movie Dante's Peak? No? Well I did and it was filmed in a town in Idaho, right on I-90. The place is Wallace and it's famous for that, and whores. That's right, WHORES. There's even a Bordello museum, if that's what gets you going. And since that's really super interesting, why then am I offering a picture of these seemingly innocuous poles?

No reason, they just came up on the side of the road and caused us to narrow our eyes and pick through our brains for their purpose. They're fountains, of course, but their location is the oddity. Positioned right next to the freeway––I'm talking 5 feet away––they are proudly described as Elmer's Fountains (end of description). Do these poles have some connection to Wallace's whores? We may never know.

The day's real showstopper was our excursion to Butte, Montana, home of the Berkely Pit. A massive hole in the ground filled with TOXIC WASTE? You've got to love that. Entry was free, even. I'd have paid twice that. To get to the pit you had to go through this tunnel: 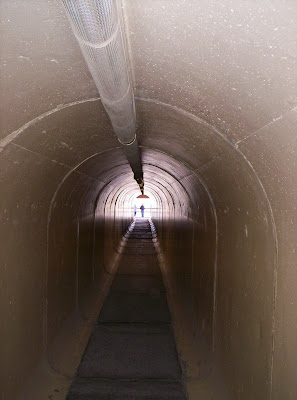 And no. The metaphoric value of passing through this pipe to get to a big shithole is not lost on me.

The pit itself is massive and the picture is going to do nothing to allay that but here it is anyway: 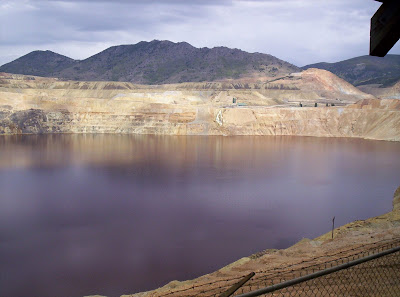 And one last thing: 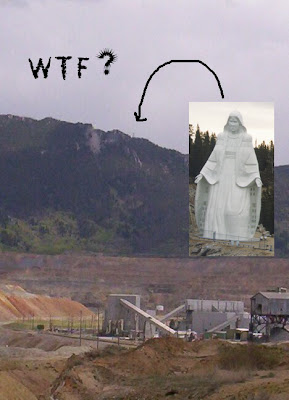 That's Our Lady of the Rockies looking over the slurry of chemicals in this toxic town. Why? Why?

After our self-tour we stopped by the Butte KFC/A&W, because the only thing that could cleanse our minds of The Madonna of the Toxins was artificial chili flavoring from the filthiest fast food restaurant in the nation. Our root beer float specialist's name was Goodgun'z (I'm not making that up), a nice enough fellow but having a stressful day as evidenced by this statement:

"I'm going to have a nervous breakdown."

You can only ask a guy to make so many floats at one time. Let me tell you, three's the limit.

As a finale for day two, someone arranged for road work and a nasty storm to greet us in Billings. It looked a little like this: 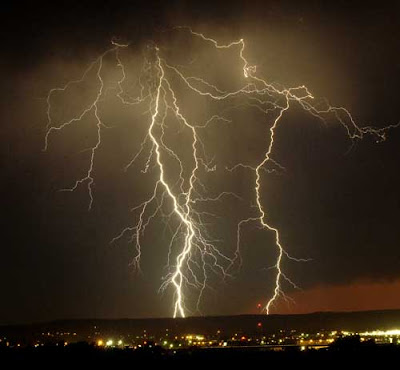 Have I told you about my lightning phobia? Good thing the interstate had turned into a lake, I was too busy hydroplaning to notice the bolts of death all around me. Obviously we made it through to the Holiday Inn where we were promptly registered into their final room near the staff break room. It was lovely.


Next time: The Reservation IGA and Rapid City Splats. See you then.