My wife and I saw Grindhouse at a matinee yesterday, just like I would have in the '70s with my mother. I have to tell you, my mother was so cool to have around as a horror fanatic kid. What 7 year old, that you know, saw The Omen in the theater? Sure I'm showing my age with that but you've got to be a little jealous, too. At my tenth birthday party, we checked out the reels of Night of the Living Dead and a projector from the library and had a showing on our living room wall.

Slapping film, shaky frames. Groans and screams from the pack of wild 10-year-olds. It rocked! 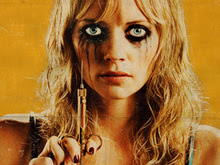 So, Grindhouse and particularly Robert Rodriguez's half, Planet Terror, was like a big ole ice cream scoop full of gory nostalgia. It was awesome! And I don't use that word. From the opening trailer for Machete! to the final scene of Death Proof––make sure to wait for it, it jumps back in right after the credits roll––the movie had me hooked.

Zombies on a rampage is standard fare, but Rodriguez masterfully brings back that Italian Giala feel and goes for some of the sickest gross-outs you're likely to see in an American theater, this year. The acting is great fun and as over-the-top as the special effects. Rose McGowan (Charmed sexpot) and Freddy Rodriguez (Six Feet Under) as Cherry and El Ray, chew through their roles like umbilical cord, and Marley Shelton (above) is on hand (pun intended) for some of the sickest moments. Loved it. Loved it. Loved it.

Don't, Don't, Don't leave during the intermission! The fake previews––Werewolf Women of the SS, Don't, and Thanksgiving––are hilarious, particularly Eli Roth's take on the holiday bird. If you haven't pissed yourself…then, suggested pee break: Head to the restroom right after the intermission, as the screen fills with the "Our Feature Presentation" graphic.

Death Proof is being maligned for the inane, seemingly incessant dialogue that marks it as truly Tarentino. From a writerly standpoint, the auteur has a way with capturing the reality of how people talked in the B-movies of the '70s, and to some extent in real life (try eavesdropping in the mall). Kurt Russell is creepy as hell as Stuntman Mike, but he's got a hot car and a Cronenberg-style crash fetish. The car scenes are impressive and cringe-worthy.

I can't say enough. See it.

Joe said…
Grindhouse is my most favorite-est movie since...ever. I loved every frame of it, which seems appropriate since every frame seems to have been labored over and as perfectly distressed as a junior high Trapper Keeper. I loved the Rodriguez' jump cut into the blazing barbecue joint and all the blasted-out oversaturated color. My expectations for the fake trailers were almost ridiculously high, and they were still exceeded by the likes of Thanksgiving and She Wolves of the SS. The whole experience was a perfect throwback to the Times Square childhood I never had -- I especially liked when the seat in front of my blasted out a puff of cheap gin up my nose and a mechanical bum's hand extruded from the armrest to jerk me off during the second feature, giving me weeks worth of nightmares for afterward. Exquisite!
1:45 PM