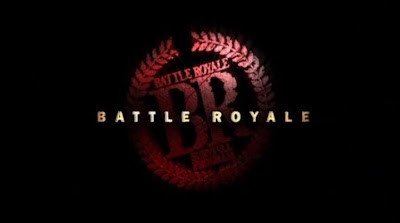 Holy Shit! Have you seen this?

I remember the outrage about Battle Royale when it came out in Japan, in 2000. It was subsequently banned or boycotted by US stores or DVD manufacturers or something––Don't expect fact checking here, I'm the creative type. So, I didn't expect to find it at my local library, but there it was. 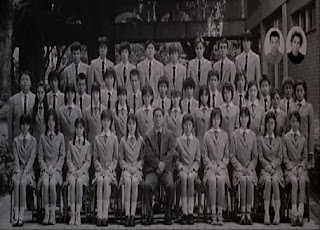 For those not in the know, Battle Royale is two hours of bloody mayhem perpetrated by and against 42 ninth grade kids. The setting is a future Japan. Adults have become paranoid of their children and the government has instituted the Battle Royale Act to scare kids straight, or just get rid of them. The film begins by introducing the winner of the last "game", a young girl pasty through bloody streaks. In this installment, the third "game," our heroes Nanahara, Noriko and Nobu are friends and classmates on a field trip, when the bus is gassed.

They wake in a classroom, metal neck cuffs installed. Their teacher explains the program with the help of a chipper neon Harijuku girl video. The plan: Kill each other, until only one is left, within three days, or the necklace will explode (and it does! Heavy on the arterial spray). 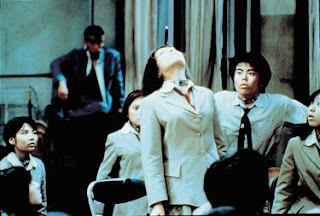 Think of the violence of Kill Bill, particularly the Showdown at the House of the Blue Leaves, but with children. The body count is massive; only two survive. It's exactly what you're thinking: sick and twisted. Some of the kids are itching to get down to the wet work, most are destined to be victims (just like in real life), and some are rebellious and smart. Can you guess which ones? The children are released on a deserted island and play out a bloody game of Survivor: Paranoia Island. Can you tell the movie has turned me into a quivering fan boy?

The film easily deserves an NC-17, and would have received one had it been released theatrically. In July of last year, New Line snapped up the rights for a remake. But don't bother waiting for an American Battle. Our special interests groups will never allow it, as written. By the time it hits the screen, the actors portraying the kids will be college aged and portrayed by your favorite CW stars, and the violence will be watered down to garner a hard R. Soccer mom's just aren't ready to watch their 13-year-old daughters mutilate male genitals with hunting knives.

Watch this movie! It's not a suggestion.