Finally, the conclusion of the cruise into terror blog!

If you'll recall, when last we talked, the ship was rockin' and shaking and generally keeping your intrepid hero awake all night. I got up before dawn without a single apneaed moment of sleep and shambled through the rolling ship. Interesting because on a ship that carries nearly 3000 including staff, I ran into 5 people total. It was creepy. The boat groaned and grated. It was totally what I needed, to get a feel for the ship for Amanda book 4. Well worth a sleepless night. 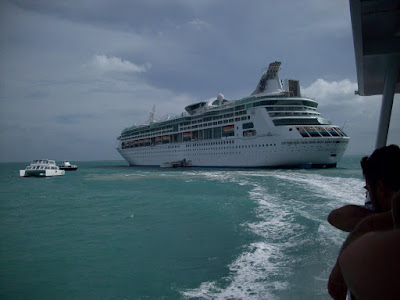 That morning we pulled into the bay off Belize City--it doesn't have a deep water port so we were tendered in (see how I pick up on the lingo?). Here's what you need to know about Belize City: from the water, it's gorgeous. Seriously. 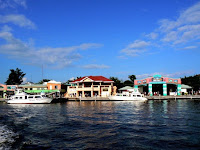 Caribbean colorblocking in teals and pinks and blues create a Disney-like wall between the cruise trade and the reality. Almost exactly like a Hollywood set, all facade. Remember the cruise malls that mark the beginning of every excursion? In Belize the dichotomy between the whitewashed tourist entry point is so severe, if I'd never been to a third world country before I would have been shocked, I'm certain some of my traveling companions were.

Maybe they should have picked up some Darvocet for our trip into the jungle (only $25 for 100 tabs! and No Prescription--I'm not saying I'm a prescription drug addict, but if I were, I'd be cruising more often). Here's the signs to prove it (though honestly, as far as you know I made these myself and taped them up on my back door. 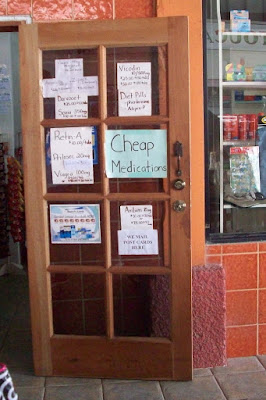 Alright, so we leave the mall because I'll be damned if we're going to pay the cruise sponsored excursion folks $50 per person to drive us out to the howler monkey sanctuary. We thought about going to the zoo, but though better, 3rd world zoos can come off as simply sad, or worse infuriating. Because travel is about taking risks sometimes, we went out into the city and talked to a woman who set up what could either have been an awesomely cheap tour (she was willing to haggle, which made me feel better--$20/head sits better with this cheapskate) or the beginning of a horror movie in which we'd be sold into white slavery (I'll jump all the way to the end scenario since none of our families would be able to afford any sort of ransom). I'm totally serious on that one - just ask mine...

Kidnapper: $50,000 or your son gets it.
Mom: Yeah. You're going to have to send the body to the Mountain View Memorial Park on Steilacoom Boulevard, thanks.
Kidnapper: How 'bout $25,000?
Mom: (chuckles) click.

See? It was a bigger risk than you thought. 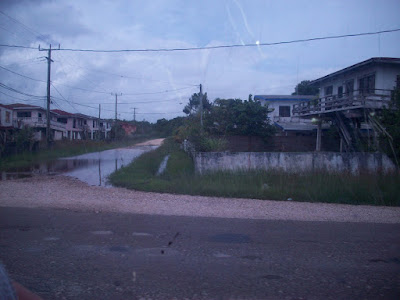 Our driver was fun and gave us the whole messy rundown on the place, pimples and all. Which made me happy (but you know me, I do love to pick a scab). The howler monkey sanctuary was an hour into the country, so we saw tons of stuff including a number of homes (for lack of a better word) that had simply been abandoned, either because they were built on bad pilings or the owners had run out of money and left to work in America for more construction money.

I'm not going to lie, when we pulled into someone's yard and our driver said, "Here we are," I was pretty sure we were about to die. But Kurt the owner of the house was totally nice, hospitable and super knowledgable. The Sanctuary itself covers a large jungled area in which several families have adopted human counterparts, living on their land. We simply bypassed the "official" guides, and went directly to the people's houses (forcing them to snatch their wet underwear off clotheslines). Caroline was mortified initially, I kept looking over and she had this fight or flight look in her eyes. Poor baby. 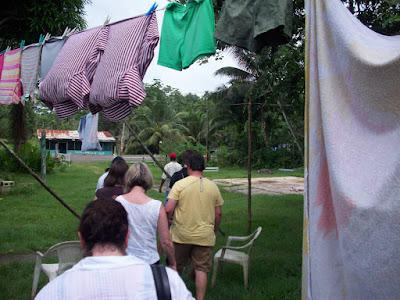 We were in Kurt's uncle's yard when we heard our first howler monkey. Kurt called for them first and I thought his voice was loud (I also was still pessimistic at that point, so I thought we might be being taken for a ride), until I heard the monkeys respond. Jesus! They're loud. Someone in the group was like "OMG how big are they?" Turns out not so big.

We followed the howling to Kurt's cousin's house and sure enough, they were hangin' everywhere. Here's Gina trying to get her hand back from one. Apparently she wants more bananas... 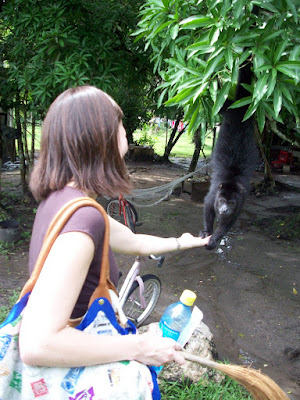 Only the longer we stayed, the more pissed the dominant male got...

How awesome is that, he's pissy? Plus, we got to use these Belizian flyswatters that were like self-flagellation devices. I had to buy one for home, since mosquitoes love me more than life itself.

Our driver took us back another way, so he could show us the prison... 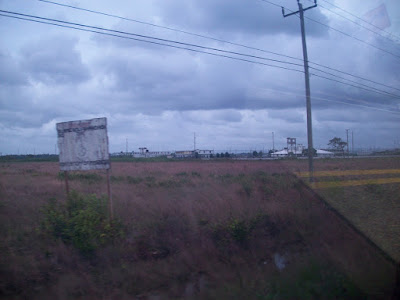 ...(which looked pretty much like the rest of Belize except for the fence), a big graveyard, with aboveground vaults because Belize is below sea level... 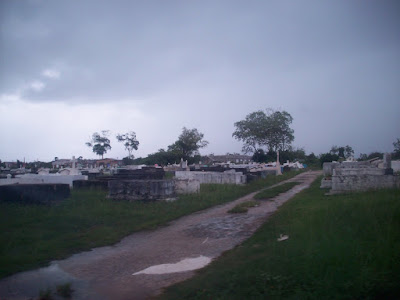 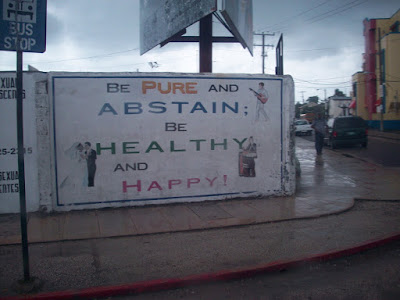 We drove back through the center of the city and really, in all honesty, it was kinda scary. The closest thing I could compare it to were images of Soweto on TV. Very shantytown, only with actual buildings. It probably didn't help that when we got back it was to the strains of a pounding tropical downpour. Still. The poverty made me even less impressed by the cruise mall, we decided to do our shopping outside the gates at the local stands. Nice people, most of them and everyone spoke English, so it was pretty easy to navigate.

Did I mention it was raining? 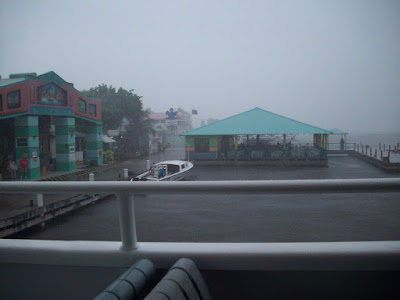 Two of us got soaked on the way back to the ship, our catamaran had a roof but was open on the sides, we ended up standing near the boat captain.

All in all, Belize was definitely the most interesting place we visited. It certainly had a visceral effect and that's what I'm after in travel. So...success.

The rest of the cruise was at sea, at some point we passed Cuba, but it was night so you couldn't see anything but the lights of Havana in the distance. So, let's breeze through... 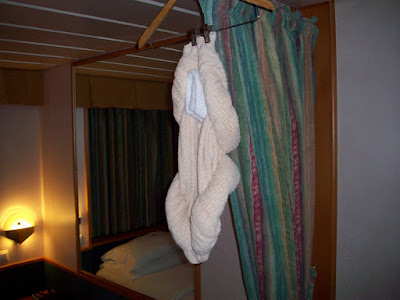 The night we left Belize, this carcass was hanging in our room, we call it our towel vulva, but I suppose from this angle it kinda looks like a howler monkey (I'll give them the benefit of the doubt--though really if you know there are drunken adults stumbling into the cabin, why not go all out with genital towel sculpture?

We came up with a particularly heinous zombie scene at this table in the bar (and by heinous, I do mean offensive to nearly everyone--expect that in book 4), Kevin nearly siezed... 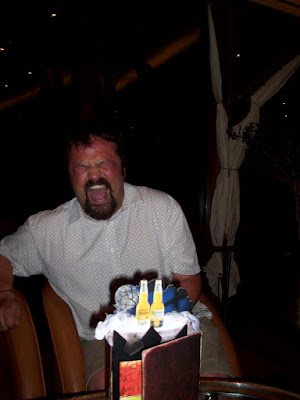 The next day got me caught up on my reading and drinking... 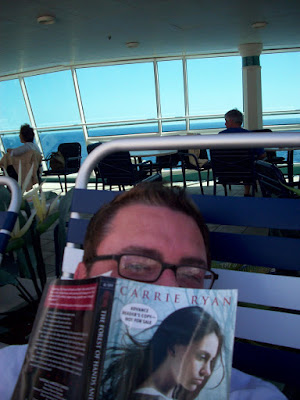 ...and as I'm losing steam here by the second, let me wrap all this up with the final towel carcass of the trip. The dreaded Dead Turkey Towel!!! 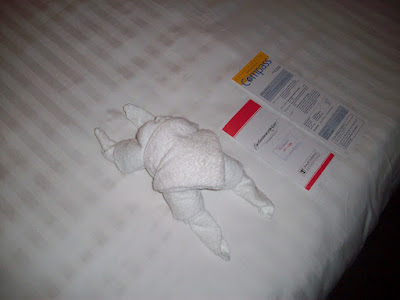 If you think it's something else, please share. The next morning we got our bar and tip bill, which was excessive...on our part, granted. Cruises are a great value for people who don't drink.

I was actually really surprised that I enjoyed it as much as I did. Gained 5 pounds, though. Damn you Royal Caribbean!!

Where should I go next?

Anonymous said…
Looovved your portion of the blog on Belize...went there on a cruise too last week and I WAS shocked because I have never been to a third-world country myself. After we were tendered in, and encountered the generic cruiseport shopping area, I begged my husband to venture out into the city with me (against his wishes). After being mobbed by approximately ten different people at a time begging for ten different things, he turned to me and said "%^&$ this, we're going back to the ship". He is a tough big-city cop here in the U.S. and said he's never felt so uneasy before. I wonder why they even stop there? Many other passengers who are non-divers, who just wanted to walk around, were equally pissed. The rest of the cruise was awesome though!
7:42 PM