So it's morning and I did what I do every morning, made some coffee, fed the dogs, watched a little TV (and I do mean little, because I couldn't make it through the piece of crap that was Sanctuary on Scifi--Christ on a cracker what a pile). And instead of settling in to my manuscript, I'm busy hunting for distractions. 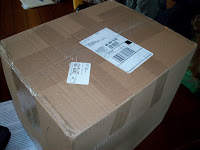 Blogging is as good as any and I've got lots of stuff to draw on. Take last week, or as it has been renamed...the week of many packages (not that kind). Take this one here, which was addressed to one Amanda Feral. I was concerned that it might be a human limb, so I did open it in public, just in case someone might alert the media (the police, sure, but that's really secondary to publicity, don't you think?). Inside was a N'Awlins themed care package from one of the awesome Glamazombies, Rebecca. 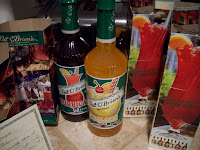 Needless to say, it was time for a midweek cocktail party for two. I think you'd concur, that was the best course of action. I didn't recall Hurricanes being quite so strong or so sweet. Damn. I was nearly knocked over, of course.

The next day, the cover flats for Road Trip of the Living Dead arrived (now with Amazon pre-order link for your purchasing/tagging needs). There were like 25 of them so I figured I'd end up giving them away sparingly. But then a couple of days ago, I got a fat package from Kensington. It must be crapping cover flats in NYC, because there are at least 200. I'll have to think of a contest. Maybe you could help in the comments. While you're at it ask Amanda some questions for her FAQ on my new website (COMING SOON!).

Last night, a truncated Team Seattle spread our urban fantasy all over the University District--and yes exactly like butter. We met up with TS Associates, Synde and Ellen (who is not a sock puppet, but Cherie's for real friend) for coffee, chatter and some Pagliacci... 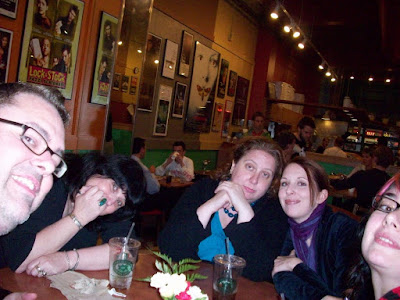 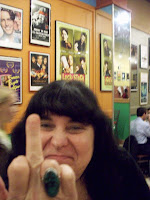 ...here's another one of Synde, giving us her critique of the guards at Folsum Prison. Then it was off to get Methodist at the Neil Gaiman Extravaganza. It was definitely a wet one and standing in the rain is not my favourite activity (did you see what I did there, Kit?), but we managed by making fun of Neil unmercifully, as is every fabulously wealthy celebrity author's curse. We saw Ciara, who's becoming a fixture at these author outings and is bound to be caught up in the swirling maelstrom of Team Seattle any day now and tried to find Lisa Mantchev, who was clearly hiding from us or squat-walking (if you know Lisa, you know she's statuesque). We were denied.

Though we did get 4th row seating. Which was awesome. Here's a totally blurry Neil now, reading Chapter 4 of The Graveyard Book. 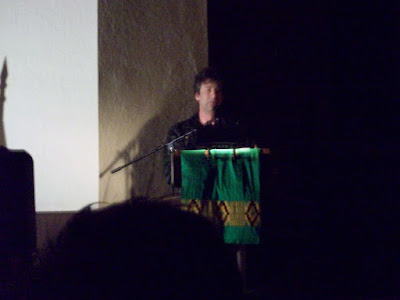 The entire chapter. Granted, he reads awfully well and the British accent was, well...fitting. But the pews had no padding (do Methodists?) and my ass was begging for a cushion within 15 minutes. Begging turned to bribery and then threats. Chapter 4 took well over an hour to read. But we did get to see the Dead Perverts and that's always fun, including the newly minted Audrey pervert (nice to meet you!). Though I noticed, San made a comment about my newly dyed tresses over on his livejournal. Which forces me to show you what havoc I've reeked... 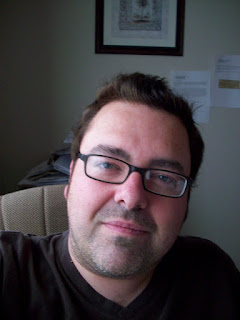 If this is the extent of my midlife crisis then Caroline's in luck. I think it's a little dark, but after doing the count I'd definitely lost the battle with the grays and was hovering at 40% of my natural color. Call me rash. Vain. Whatevs. They had to go.

Caitlin calmed me down and we raced back to the Methodist Temple and pounded on the front door. Luckily Art and Duane and the crew were still inside tidying up and the religuousness of the venue halted any thievery.

That kind of brings you up to date. Remember those questions I asked you?

Glad you guys enjoyed the care package! Did Amanda have any problems with the corn syrup in them? I mean, I know you were really concerned about that, and you are such a good friend for thinking of her in that way. If it makes you feel any better, the first hurricane I fixed for me got the same reaction -- "they're not this strong at Pat's are they??" You're in good company. :)

And, uh, I think you should give flats to the people who bribe and/or kiss ass the best. *whistles innocently*
3:34 PM

Becca said…
Oh, and by the way, Catholic pews have no padding either. I think they expect that you're gonna come to Mass already having had your daily dosage of the communal wine, so you won't notice it anyway.