For those of you who aren't members of the Glamazombies (the yahoo group devoted to all things Amanda, sick humor and procrastination), I probably should mention that we've been known to get together and hang out. Usually this happens in conjunction with some convention but last week there was a convergence on my turf.

On Tuesday, Kit Kittredge (seen here flipping the bird just like the American Girl she is) and I drove up to the new and improved Southcenter Mall (you may know it as the Westfield Shopping Town--I refuse to call it that on the grounds it sounds insane) to meet Terri, her friend Tate and Rachel from Bitten-By-Books. I can't remember the place where we ate, but they had Pomegranate mojitos that tasted exactly like soda! Why are those going to cause me to blow a liver? I can't resist the siren call of their deliciousness.

Terri, apparently, twisted Tate's screws to read Happy Hour of the Damned (in stores now) before we met and I was relieved that she had a good time with my zombie skanks. Rachel was her usual sarcastic self so you know I appreciated that. Here's Terri and Tate now. 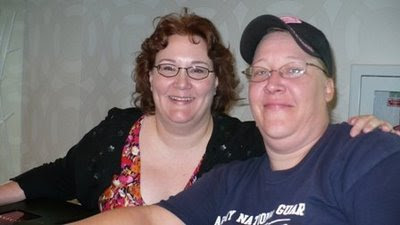 For those not in the know, Terri is traveling all over the place dropping in on her favorite peeps (yep. I'm one). Right before us, she paid a visit to Dakota Cassidy and Michele Bardsley for some maniacal Rock Band gaming (you can check that shit out on her blog). Personally, I'd have to be loaded to play that game...or alone. The singing in public is not my favorite. 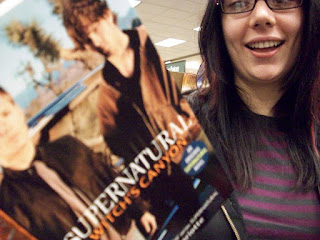 It was a short visit with the ladies as Ter had to keep moving on up to Canada (she'll be back for another action packed photoblog later this month). Afterward, Caitlin and I hit the Barnes and Noble in Tukwila where a RAUCUS reading of Supernatural Witch's Canyon commenced. I'm not sure it was appreciated by everyone, but Kit does a hell of a Dean impersonation. We did get to visit our books, Caitlin's newest, Pure Blood was on the shelves and is likely on your local bookstore's, as well. Might I suggest you check that out, poste haste? 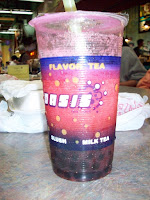 On Friday, Caroline and I met up with Virginia, her husband Pete and Synde for some sightseeing in the ever-so-traffic-ridden downtown area of Seattle. In the international district, we introduced the Pittsburghers to Bubble Tea (a milky/fruity concoction laden with black pearl tapioca and occasionally coconut jelly rectangles). Apparently, boba hasn't made it's way east so much and Virginia didn't take to it like I'd hoped. Ah well an acquired taste, I guess. We grabbed some lunch at Yuwajimaya (korean bbq and kimchee), Synde showed off a large uncircumcised dick...er, geoduck... 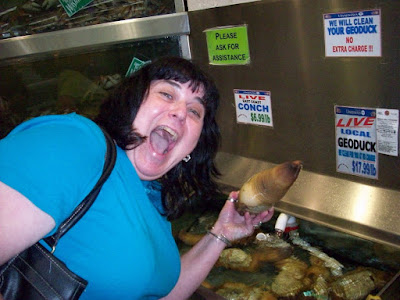 ...and then we hauled ass to the Seattle Center where the Space Needle is located. I've been up once and that was enough. We ate dinner in the spinning restaurant and if that doesn't even sound like a bad idea, imagine it in reality. Virginia and Pete went on their own while we got typical and swung by a Starbucks and waited. Then it was off to the mecca for all urban fantasy disciples (since they have everything paranormal), the University Bookstore. I found Dean Lorey's Nightmare Academy in its original cover--I'd been looking since Conestoga and had resigned myself to the paperback reissue when this baby peaked its lovely head from the shelf.

After a horrific traffic jam downtown, we changed dinner plans and met Richelle, Kat, Rachel and her husband Cliff at Jai in Fremont. Many foods were consumed, but I was most concerned about the bovine blood sauce on a menu titled, "for the adventurous." No. We didn't try it--tempted? absolutely. In this shot, Virginia and Richelle mug for the camera (are you aware it's impossible to take a candid shot of Ms. Mead?)... 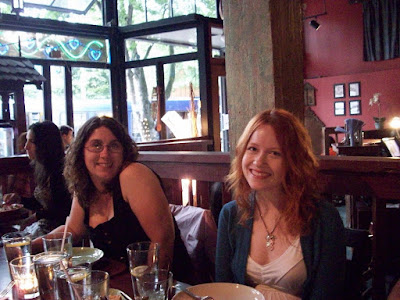 ...always with the smiling. 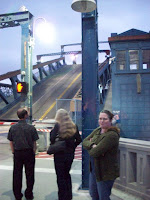 After several plates of Pad Thai, Pad See Iew, Panang shrimp, Gai Ga Prau and curry fried rice, we dragged our bloated asses off to a bar. Kat mentioned that it would be just our luck to get to the bridge just in time for a boat to pass and guess what? Just like a true jinx, the alarm sounded and the gates dropped, leaving me plenty of time to test out my newest gang tag. 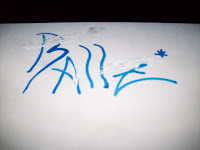 What do you think?

I love that it straddles the line between wholesome and nasty, and that asterisk just screams, "there's a hidden footnote on this bridge!" Who can ignore the allure of the hidden footnote? I dare you. 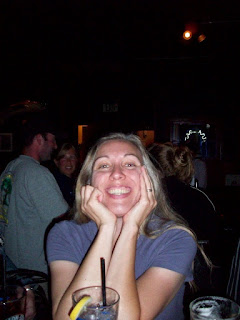 Cheap drinks and conversation is a recipe for an awesome Friday night, no matter how you slice it. Kat clearly agrees.

One thing though--and Richelle insists that all bars smell this way--I kept catching a urine smell. Not the kind where you're sitting near the bathroom and a puff sneaks out with the last drunk leaving the John. NO. This was long-term leakage (Thank you She Devil for that line). It was like someone was too drunk to stumble to the toilet and just whipped it out for some under the table relief. But...like I said, the drinks were cheap. It's amazing what you'll put up with for cheap booze. Writers.

This was the chance to hang with Rachel and Cliff as they're off to the wilds of western Kentucky--God help 'em. Here they are in a shot not involving Cliff's tongue (oh yes, they're naughty)... 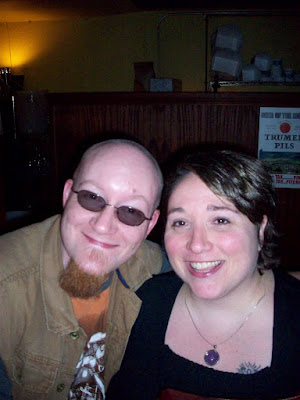 The Blentz Funeral Home is the bar's next door neighbor (so you probably shouldn't order the short ribs) and Synde and I couldn't resist doing a little late night exploring. Here's a shot of the parlor... 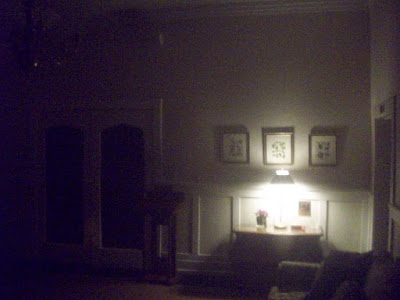 ...I took it through the window in the front door, hoping to catch an orb or a weird shadow. Still, it turned out pretty spooky, if I do say so. Which is the perfect preview of tomorrow's photo (and video) blog over at the League.

Caroline and I went to Port Townsend this weekend on a ghost hunt. Were we successful? You'll have to check back tomorrow.