So I'm exhausted. Not just physically tired from this morning's workout but brain-tired like I've taken a handful of Benadryl--only I haven't. I get this way after long weekends with too many obligations. And this one was packed.

On Thursday, which is the new Friday, I got an email from a friend reporting such. In a flash, my plans for a leisurely night of Last Comic Standing and a few chapters of reading gone. Our regular Friday fun was bumped up. I use the term "fun" loosely, as it's a bit of a rut. Dinner, some shopping, coffee at a bookstore. Seems boring, right? Luckily, the actions don't determine the entertainment, it's the people...and our friends are nuts.

We ended up at the fireworks stand and spent too much money on things that go boom. Question: since when are mortar fireworks "safe and sane". We intentionally avoided the reservation this year to model civic responsibility for the Goddaughters and yet, the Fire Department approved stands seem to be selling the exact same fireworks (for double the price). Do I smell kick-back?

Anyway. The 4th was a good time. I made German potato salad, which feeds an army and turned out really well. Brisket, Crab, Ribs, good stuff. Especially when the time came for the ritual new baby lemon taste!

A couple we know recently adopted a baby and right around the 1-year mark--as is our tradition--new babies get their first taste of that sourest of citrus fruits. Oh the smoosh face! How we love it. We were not disappointed, that little face scrunched up like a cat's anus and then she went back for seconds.

Which totally reminded me of this major lapse in judgment... 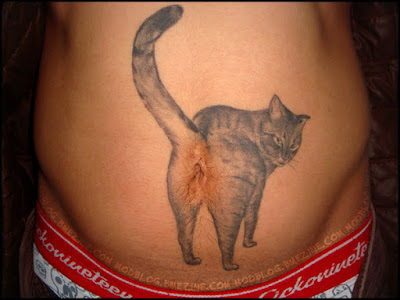 Saturday, we returned to the scene of the crime, devouring leftovers like a cloud of locusts, completely sated until someone--I think it was Caroline--opened her demon mouth and suggested Dairy Queen. Seconded quickly, we were off to the most disturbing fast food bunghole on the planet. Let's talk briefly about location. South Tacoma Way has had its ups and downs. New projects roll in and force certain ladies-who-aren't-walking-for-their-health to change their route. Moving from in front of the Filipino grocers and taquerias to the aging strip of grease peddlers.

So we pull in, nearly clipping a particularly thin lady in skin tight jeans, stilettos and a weave that started about two inches above her forehead, a Klingon without the ridges. I know what you're thinking. Hey Mark, lay off, at least she had the common decency to wear the uniform.

I'll give you that. Because the next one was wearing a stained t-shirt that rode up the sides of her ample belly which was modestly covered by the cotton shorts she'd pulled up so far as to expose the sag in her granny panties. This is not a good look for lounging around the house, let alone attracting some quick work and a twenty dollar bill.

We would have been mortified, if it weren't for the fact that this Dairy Queen was being operated by gang members and more specifically the Bloods. You'll need to clear your heads of some stereotypes here, cuz this was a diverse bunch--Tacoma gangs are a proudly inclusionary bunch, color blind in their initiation decisions (call them avant garde, but a white kid can just as easily bust a cap, or at least we've found that to be true).

Not everyone in the joint seemed to notice, though the clues were everywhere. For me, the tattoos gave it away as did the preponderance of red clothing, red bandanas and an overtly hostile attitude toward the customers. I didn't need to see the butt of a gun poking from the Blizzard maker's sagging jeans to know we were in a bit of danger. Or at least in danger of going off our carefully planned diet. So we sat quietly and gorged. Any loud nose sure to be met with a barrage of bullets and the tinkling rain of shell casings. Who knew soft serve could be so hardcore?

Sunday was a bit more relaxed. Grocery shopping and zombie movies. Zombie Honeymoon was, of course, a hot mess, just real crap and I ended up shutting it off after the first hour. Sentient zombie or no and totally incongruent with the title, it was being played too seriously. I did finally watch Romero's Diary of the Dead and while it wasn't a complete pile of crap (see also, Land of the Dead) it didn't work for me. Except for the mute Amish guy. He was a surprise and probably should have been the main character.

So now I must recover. Just a little nap ought to do it...