I posted this yesterday over at Fangs Fur and Fey, but it was Sunday and I don't think that's a high traffic day, so I'm doing the cross post thing...but I couldn't just post the same old thing, so I added some stuff. You'll see...

It's probably a good thing that the topic of the week is "why we pick the specific creatures we do"--which I'm barely making the cut off for, shameful and pathetic as that may be--because in less than a week, I'm going to be sitting on a con panel about zombies in popular culture, pretending to be all smart and stuff. Now despite the general consensus (not here, I'm not sure who's consensing, or if that's even a word), it doesn't require an academic mind to write a book. Research is undoubtedly done for urban fantasy novels, but I guarantee you very little has been done by me.

Certainly not in the since of cracking open a book on origins or the paleobotany of the Haitian voodou coup de poudre. Nope. Everything you need to learn about zombies can be found on celluloid, thank God. I'll reference carrieryan's post as an example of how zombie authors get hooked on the flesh-eating genre. Of course, I think my long-standing obsession that spans 30 years of film and literature--don't laugh, many would argue Cormac McCarthy's THE ROAD is a just a high brow zombie book--counts as research, so there.

It started in 1978 (a really important year for zombies, but we'll get back to that).

We moved around quite a bit, as my father worked for the feds, and I was always concerned about the timing. If we moved in the winter, would it be enough time to make friends before my birthday in June? Late summer was the best. A full school year to turn chameleon and ingratiate into whatever social group was least adverse to a prematurely caustic sense of humor and an overactive imagination.

My mother, whose fondness of horror movies knew no boundaries or political correctness (thank God), checked out a projector and two cannisters of film from the library (actual freaking film, how old am I?). Inside was that quintessential zombie classic, Night of the Living Dead. We showed it to a living room packed with children in flared jeans on a wall stripped of its 70s art in shades of Avocado Green and Harvest Gold to match the appliances and shag carpet. The blood was black and the screams weren't just coming from the tinny projector speaker.

My 10th birthday was a success, I'd seen my first flesh-eating zombie. Here he is now... 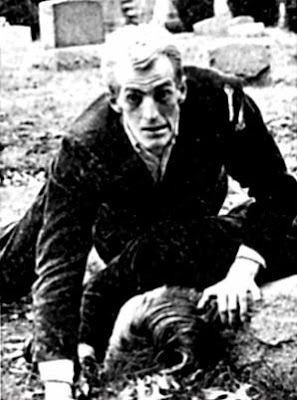 Not particularly frightening, but drape some intestines over his lapels and you've got what I like to call the perfectly accessorized ghoul. Dressed to the nines or not-at-all (seventies zombies weren't at all modest) I was done in; those zombies had me like nobody's business. What was it about these bleak characters? They were obviously metaphors, I knew that back then. But for what? I started hunting down everything I could on my new favorite monster and there wasn't a whole lot back then.

White Zombie (1932) didn't cut the mustard, so I was forced to expand my vision. George Romero's 1973 film The Crazies is probably the earliest precursor to the "fast zombies" we see nowadays (28 Days/Weeks/Months Later). A plague spreads through the population, rendering nearly everyone murderously insane. These folks aren't shambling around in their illness, they're out to get you. I don't recommend it; it's virtually unwatchable but it has a lot to say about vulnerability and government apathy. I only mention it because I know that Romero has come out swinging against the "fast zombies" and yet he really is to blame. In fact, he's remaking The Crazies as I write this. Hello? Bandwagon much? In fact, look what I found...

In 1976, David Cronenberg (Eastern Promises, History of Violence) released his first feature film, Shivers. While there were sexual overtones and a very specific parasitic element to the storyline, it is essentially a zombie movie. The parasites turn the residents of a hip trendy condo building into shambling sex ghouls. Now, don't all race to your Netflix at once, Shivers is Cronenberg, after all, and he's a master of the disturbing, so keep that in mind, while you watch this...

I'm a 10-year old zombie fiend and my world is about to change. Dawn of the Dead comes out. I actually talked my father into taking me to this one, something amused me about his disgust and he was the kind of smoker that needed to leave the theater several times to feed the habit (still is), nowadays, I probably would have been rushed to a foster home for a healthy dose of systematic sexual abuse, but back then, well...things were simpler. So I sat in that theater alone, horrified and fascinated as the dead returned to the mall and it dawned on me (get it "Dawn-ed?) that zombies were the perfect metaphor for just about any hot button social issue.

Looking back on it, there's no wonder there's a resurgence in the genre. It seemed to pick up right after 9/11, as soon as we were reminded that we were vulnerable.

I should probably wrap this up by getting back to the initial question, why did I choose zombies? The short answer is 1978 happened and I figured out the concept of metaphor. But the real reason is, I'm still fascinated.