...that 5 things make up a blog post. I'm more than happy to post about a single item, but if this is the consensus then I'll comply.

1. And this is an important one. A warning for the coffee curious. Starbucks' new Honey Latte smells like unwiped asshole. I'm not joking. I have nothing against honey or coffee but put the two together and you've got a pair nearly as frightening as Skin & Bones (that's the new nickname for the Flockhart/Ford travesty, as coined here.) It's not that it tastes like hot butt (nor do I have any clue what that flavor might be), it's just the ass fume rising off it that turns my stomach. You've been told.

2. Saturday was my book release party and it seems I'm obligated to throw down in the debut cake battle, though I assure you I'm not the winner (that'd be Caitlin--ganache trumps all). So here it is, after all that bullshit I went through with Tasha Nichole, including a $15 up charge making the cake $70 total, here's what I got... 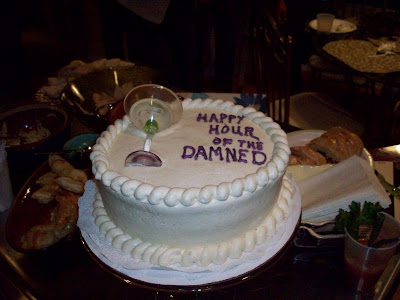 Seriously. It's like she took the cake down to Safeway, gave it to the ambivalent teen with an afterschool job forced on them by by parents they can't stand and said, "Oh...you know, do whatever."

What's worse? It's red velvet--I love red velvet. But that wheel of chocolatey goodness is supposed to come paired with cream cheese frosting. It's standard. This one tasted like butter cream. Dissappointed all the way around. I must offer up my sincerest apologies to Corina Bakery in Tacoma, who should have gotten our business. Their red velvet is the awesomeness, as we found out when we bought one for my wife's birthday party last year. I think my memory is going. Which isn't helped by...

3. Zombies aren't just flesh-eating idiots, but super dangerous cocktails that if consumed prior to your party will render you near incapacitated and with a blurry memory. Sound good? Then here's the recipe I used...

Stir with a couple of handfuls of ice and serve in a big ass party cup of ice with a float of Bacardi 151 rum (that last bit is not optional). I like a bendy straw, too. Some people like a cherry. Who doesn't?

4. Completely unrelated, unless you count the fact that our party music was taken from the setlists in Happy Hour of the Damned, is this video from The Raveonette's. Jeri Smith Ready, or Goody Jeri depending on your internet memory, blogged about this My Bloody Valentine/Jesus & Mary Chain throwback. Since then, I've been enamored and they've made their way into Road Trip. Here's Dead Sounds...

Aaaaahhhhh! David! We very nearly were able to come full circle, but hot piss isn't quite dirty asshole, still it's all very scatological as my friend Di Francis might say.

P.S. I almost made the 5 thing, but I guess this is technically 6. Jim Hines blogged over at the League and I'm not sure whether that was announced over here at livejournal. Jig's campaining like a m-effer so check it, and buy Goblin War, because if you don't and humorous fantasy becomes unpopular and therefore extinct, you'll have no one to blame but yourselves. No one!