Clothes are tumbling in the dryer, leftover swag and suitcase entrails litter the kitchen table and my third cup of coffee is barely eating away at my extreme exhaustion.

Such is the day after Norwescon.

It was a genuinely great experience. Met tons of awesome folks, including quite a few lj-ers (Hey y'all!), cool new writer, artist and bookseller peeps, and new fans (well they'd all be "new" technically). However...I'm not comfortable blogging about rainbows and gumdrops so it's about to get ugly. Uglier than this even... 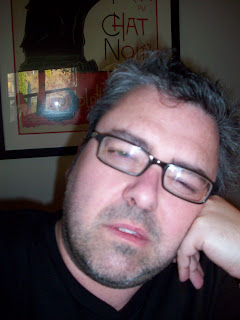 Please take note of the new grays (each one has its own unique and horrific name). Let's start with gray #1.

Last Saturday, we went grocery shopping with a friend who is apparently trying to kill me, therefore "friend" may be a misnomer. Said "friend" suggested hot Kashi cereal was a "delicious and healthy alternative" to oatmeal. While I'll agree that the texture was interesting, the flavors were stronger and a smaller portion seemed to fill me up, the after effects left a little something to be desired. Over the course of a week, the glands in my throat swelled, my breathing constricted and I was left flush an light-headed. By Thursday, I thought I was having a stroke. Yet, I still went to Norwescon because I had a panel (my first ever). It was about the best horror movies so I figured if I stroked out right there in the conference room at least I'd give the people a good show. The next morning, I went to the doctor panicked and full of self diagnoses. I may have mentioned the word thrombosis, but I can't be sure.

Needless to say Dr. White looked at me like I was a complete retard (which is debatable, even under normal circumstances) and diagnosed it as an allergic reaction. He prescribed steroids and benadryl, told me to lose "at least" 50 pounds (oh yes, in quotes) and sent me back to the con.

I finally met La Mantchev at the hotel coffee shop about an hour before our panel for writers who blog or vice versa. She was peppy and genuine and we like her (that's the royal we, this time, you can make up your own minds). She had in her hot little hands a shiny new copy of Shimmer, the new issue of Weird Tales with her story Six Scents inside and a packet of perfume samples that correspond to the story. 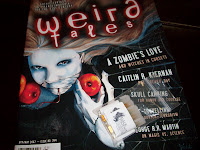 Needless to say, I was excited. Not since John Waters played the "odorama" card for Polyester had I been so needy. She even offered to let me have it and pay her later. But knowing how flighty I can be, I thought aaaaaah better get the money out of me first. Of course, after our panel I swung by the ATM and got me my monies. Then where was Ms. Lisa? Um...nowhere. Gone. I looked all over for her. I caught a glimpse of her across a crowded room once after that, but nope. As I was leaving yesterday, I ran into her in the lobby, she was sans Shimmer and I was, of course, sans money. Being a generous and trusting individual, she gave me a copy of Weird Tales and the perfumes in exchange for a promise to Match It for Pratchett.

3. The Surprise You're a Moderator Gray

When I checked in to the convention I was under the impression that I'd be moderating one of the eight panels. Not so, as it turns out. One guy who was on a few of my panels bagged out of the con, leaving the panel moderator-less. Including the very first one. I've moderated therapy groups, though that was called facilitating--and a weird thing happened that wasn't at all helpful to the panel process. I kept dropping into therapist mode and had to shut myself down before I spoke. When there is a lull in the panel, it's often appropriate for the moderator to bring up a new question or direction and not, for instance, point out the lull and comment, "Is this silence uncomfortable for anyone? Does it remind you of home?"

On Saturday, I had three panels back to back and by the third one I was late and supremely loopy. Made a complete fool of myself, much to the delight of the audience and my co-panelists I'm sure. I don't remember a whole lot of it (I'm going to blame Doctor White for that), but I do remember talking about my mother a great deal, zombie obsessions, and recurring dreams. Thank God the swag distracted people. 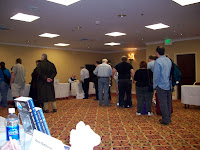 On Saturday afternoon, there was a signing event of which I was a participant. Norwescon guest of honor, Dan Simmons was signing at the same time, so please note the view of his line, unobstructed by anyone in front of my space. It was quite impressive. At one point it stretched across the entire space.

We did sign programs and books though and had a good time pretending that one day we'd be over there where Dan was sitting, people rolling up with suitcases of first editions for the signing. Hmmm. Who's we? Why these folks here... 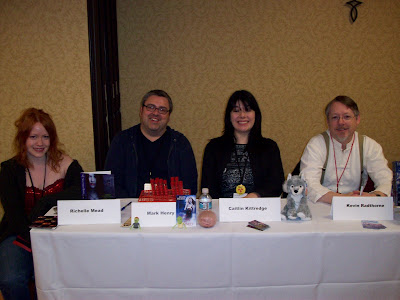 And NO, I don't know who the guy is on the right. Anyone care to fill me in? The card says Kevin Radthorne, but I don't think we even introduced ourselves (though in our defence, Cherie Priest was responsible for introductions, or so I'd been led to believe). I could be wrong, but I don't think so.

5. The Caitlin Kittredge I'll Go Emo if You Don't Party Until One in the the Morning Gray

After the lunacy of my Saturday panels, I decided to bag out of the evening festivities, so I walked back to my hotel and pondered room service. You see, the night before Mario and I hit a couple of the parties, one of which was in a hotel room where the centerpiece was a big ass white bucket of toxic waste. The green sludge issued via ladle was both disgusting and oddly satisfying in a weird probably-shouldn't-mix-Everclear-and-antihistamines kind of way.

Anyway, a slew of text messages coaxed me back to the Weird Tales party where the Seattle Crew (yes we'll be doing a "Step" tour soon) hung out with the likes of--excuse me while I name drop--Gordon Van Gelder, totally interesting publisher of The Magazine of Fantasy and Science Fiction, Jeremy (Fucking) Lassen, publisher of Nightshade Books, all around fun guy and snazzy dresser and John Picacio, artist and party muse. After we left the penthouse, we caught up with Pat Rothfuss, whom I'd never met and had to introduce myself (thanks Cherie) and jaywalked across the street from the con to THE PARTY AT THE END OF THE WORLD. Here's the rundown on that: 500 sweaty people packed in an area the size of a living room drinking cherry and banana Everclear slushies and watching wet t-shirt contests through saucer eyes. Not since high school, I tell you.

Speaking of Caitlin, we both had fairly well attended Easter readings, especially compared to the woman who read before us who had one guy. Eek. Thanks to everyone that turned up for that. Shout out to criada and kaerfel, and the two other ladies that I think were on livejournal, too but I didn't catch their screennames.

6. The My Audience Always Knows More About the Topic than Me Gray

Because Happy Hour has so many horror elements, I got sort of typecast in my panel selections. Something that came up in nearly all the horror panels was a movie called The Signal, which seems to follow a similar construct as films like Romero's The Crazies and recently the J-horror of Kairo (Pulse). So you know I had to go find the trailer...

So that's it. Next up is Romantic Times and I have to tell you, I'm concerned.