So, I'm sitting here plotting out and outlining Book 3 and realizing that I'm the last of Team Seattle to weigh in on the Portland road trip...and it was my reading/signing, even. They've already posted pictures, told their little stories, replied to comments. What else is there to say, right?

On Monday, I rented the van from Chad at Enterprise, who seemed genuinely impressed that I was going to Powell's for my signing, though not so impressed that he didn't turn his nose up at my Mastercard debit card. Apparently, you have to have a "real" credit card to plop a deposit down or you get no Grand Caravan, or a regular Caravan, for that matter. To his credit he got a waiver from his manager (or the dial tone, either one)--I had my suspicions. But as he walked me out, he got me to sign-off on Enterprise insurance. Normally, I would never pay extra, but I'd been waiting for nearly and hour. I'm pretty sure it's part of the sales plan to wear you down with smiles and boredom and then go in for the insurance kill. I could be wrong. Chad are you out there?

Anyway, Tuesday I drive our tired asses (still exhausted from Norwescon) down to Oregonia. Past the new waterpark hotel--which looks frighteningly like a modern meat packing plant--the religious statuary park of unknown origin and scads of billboards proclaiming that heathens such as our selves were bound to find ourselves roasting over a pit while Hell's minions pissed on our charred flesh (I'm paraphrasing).

The hotel was nice and the price right (Richelle is a master travel agent sure to open a side business soon--heads up). We freshened up the naughty bits and took off for the downtown Powell's aka The City of Books, in case anyone was wondering what the title of yesterday's post meant.

For those who've never been there, may I suggest an economy car for the parking lot from Hell. It's a creaking maze of posts that is much better suited to accomodating motorcycles than minivans. Powell's is Mecca for new authors (and not so new). We came to sign the post. THE POST. Here it is, please note the awe. 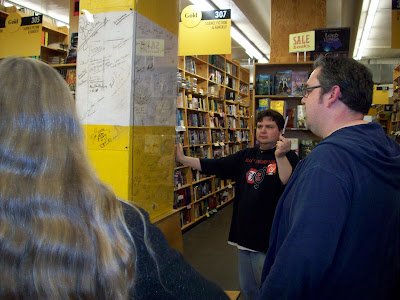 While we signed, I kept whispering to Caroline to keep snapping pictures. With the plexi-glass being hefted precariously over our heads the whole time, I was expecting a Final Destination-type moment and you guys would have been pissed if I didn't capture author-under-glass. 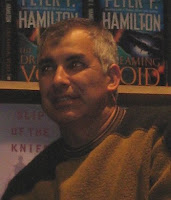 1. Whispering makes things more interesting (you'd think I'd have remembered this from psych 101).

2. It draws children out of the woodwork. Cuz who doesn't like secrets?

By now, I'm sure you've all seen the paparazzi image of a mother rushing her little girl away to the manager's office to discuss a potential lawsuit. If not, swing by katatomic for the proof.

After the reading, I took some questions and realized that a friend from high school was in the audience, which was cool, as well as this little lady... 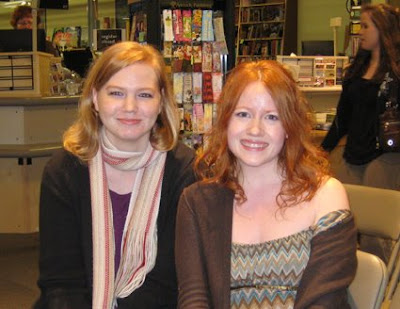 Oh...my. I know the fangirl in Jill Myles is damning me to hell, cuz that's Meljean Brook (Demon Bound, Demon Night) sitting with our Richelle. She came by to have her book signed and say hi, and she was super nice, so there you go. Got to meet an lj friend or two, as well (Hi Lea! Hi Tami!). In fact, Tami got me this picture of Mario and I signing... 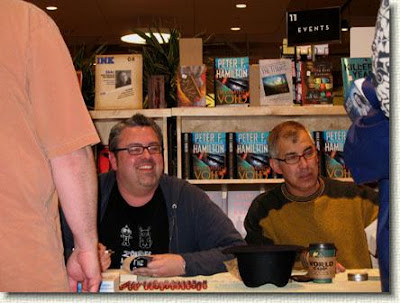 (photo courtesy of Tami Hawes)
After Powell's it was time to ditch the mini-van and sample the various Portland intoxicants. Mario started a game of sick twisted titles that I couldn't resist jumping in on. Sick and twisted degenerating quickly into absolutely filthy. Which was, of course, magical, but I don't think I could repeat anything here without being arrested on indecency charges.

Someone at the table pointed out that by creating a play on words we could elevate our filth to some pretty high brow humor. For instance, cockrings are funny but not as funny as a cockring of fire, which is the only kind the "man in black" would ever utilize. Do you see how I protect you with the tamest thing I can remember? I didn't even mention spinabifida once.

I can't think of anything else, right now. The ride back was somber because we were sans Mario, who'd flown back to Denver for another signing.

Don't forget to come down to the University Bookstore in Seattle tonight, to catch Caitlin and I reading stuff out loud, possibly in accents. 7PM to whenever.