Is This the AA Meeting? No? No? 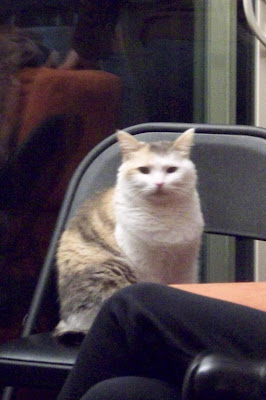 Friday night, Caroline got off work early so we could enjoy a white tablecloth dinner in Seattle and then bounce on in for the main event, the Richelle Mead/Lilith Saintcrow (or vice-versa) reading at the University Bookstore. Because we are, in fact, us. Things didn't go as planned.

Reservations were made, Caroline got home in plenty of time and then the mishaps began. Jesus wept, with all the mishaps. First, I forgot my camera. Because I am a consciencious blogger and knew how dissappointed (read suicidal) all my electronic friends would be, we pointed that car back toward Questa Verde and subjected it to the Sunday driving habits of the minivan set.

So, we hit traffic, now bumper to bumper. We live south of Tacoma, but on a good day it only takes about tweny minutes to make the curve up to the "big" city. Friday, it took 45 minutes. Needless to say, we didn't make our reservations and ended up in a hole in the wall Thai place that served the most awesome Pad Thai ever, Thanks Mae Phim! Enter at your own risk, the food is awesome but the kitchen looks like a health hazard and it's open to the restaurant like a floorshow. Not the kind were the chefs sport crisp uniforms and stainless steel appliances, either. In fact, the only reflective material was the wall of tin-foil, and the twist ties the carried the bolts of power cords in from some undisclosed location.

Can you say, Deathtrap?

Anyhow, the service was quick and the food cheap, so we were willing to put up with ambiguous bacterial threats to our physical safety.

We got to the reading early and looked around the store, which is huge and spread out over three stories, so it's like a fantatic reader's heaven once you get past the homeless person perennially guarding the back door. If you ever make it to Seattle, you've got to check out the sci-fi fantasy section at the University Bookstore. Huge selection and I'm not just pimping it because they're hosting...

An Evening of Werewolves and Zombies
A reading/signing event with debut novelists Caitlin Kittredge (Night Life) and Mark Henry (Happy Hour of the Damned) March 27 @ 7:00 PM.
No. I pimp because it is the best selection in the state.

Now. Onto the photo spread.

This is Duane...and Lilith...and Richelle (in descending order of height, oddly enough).

Duane is a great advocate for the genre and he always peppers his announcements and introductions with a quick wit and a resounding love for all things speculative. Lilith hit the podium first reading from--prepare to be jealous--not the fifth Valentine book (To Hell and Back, on sale now), but from her new series superstar, Jill Kismet, and the first book, Night Shift. I'll pause so that you can wipe a tear. Richelle read a scene from Succubus on Top, that had the crowd giggling over demonic potheads. They took questions and did the signing thing. 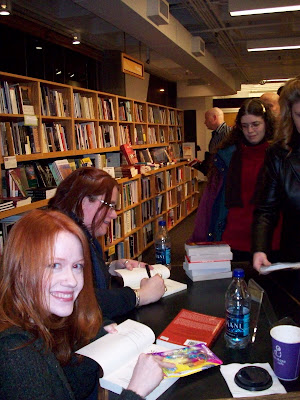 And...I got to meet new lj and blogger friend Synde, which was awesome and affirmed to me that you people actually exist.

It was about this time that we realized we had nothing to contribute to the after party. No booze of any sort, nor cute gifts that grow--or turn into greasy stains--when soaked in bathtubs full of water. So we sped off for the Ballard Safeway and bought a lovely Kendall-Jackson Pinot and an OK magazine (becuase Britney's trying to get pregnant). Our checker was none other than Frances Dollarhyde, the Red Dragon from the first outing of Hannibal Lechter. Creepy? Possibly. But this one would at least joke with you before taking a bite.

So...we were set. All we needed was a corkscrew and a toilet.

We arrived to a party in full swing... 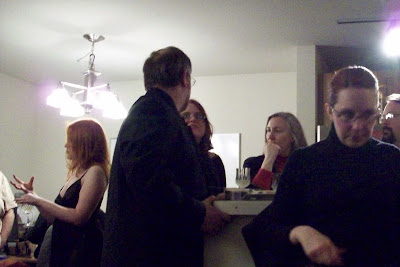 Seattle glitterati mix with visiting author.
After a quick lap, a glass of Cab and an actual intro to Ms. Lilith, we settled in to a comfortable crowd watching location on the oft-mentioned salmon loveseat and I began to take note of the debauchery. Scads of debauchery. Promise. 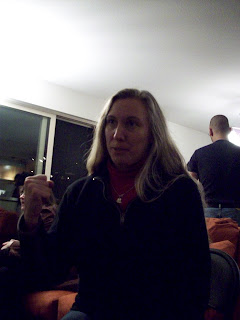 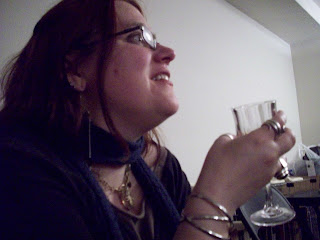 ...but drove Cherie Priest (Not Flesh Nor Feathers) into an unexpected rage... 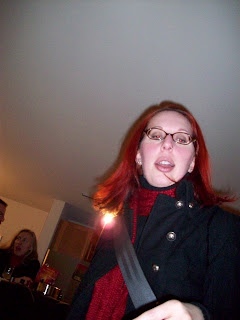 Actually. That last bit was fictional. But this isn't... 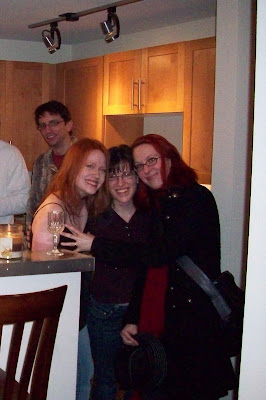 Holy Shit! Mockumentary Lesbionics!
You only see it here, folks. Anyway, great party and lots of fun talking to Lilith (who gushed about Happy Hour and made me blush). She was a blast, sarcastic, witty and all about the fun.

Looking forward to the next big reading (Kim Harrison, I think).

Note to photo-victims: if you absolutely can't live with your image on my blog, shoot me an email and I'll replace it with something even more offensive (or just remove it).

Jaye Wells said…
Wait. All that and you get Kim Harrison next? Someone's been sacrificing chickens again.
3:59 PM