We're in the middle of a windstorm/rainstorm/flood event here in the Pacific Northwest. Hurricane force gusts (one happened just as I typed that--creepy, eh?), and urban flooding. We'll probably lose power soon.

So why am I so happy?

I just got an email from a book reviewer that was totally complimentary and kinda gushy. I was so elated reading it, I think I blushed. I was just as happy to see that Jenn, or goth_huntress (to those in the know), has some nice things to say about HAPPY HOUR on her livejournal and at Urban Fantasy Fans.

These guys are going to have me changing my pessimistic view on people. Maybe life is worth living. Who'd a thunk it?

Not dedbutdrmng. My friend RJ Barker's got a story in Shine called Automated Replies. It's a trip to a not so nice future, and in 373 words you don't have an excuse not to give it a shot*. I wouldn't lead you astray (well I might, but you won't know that until you've been led, now will you?).

Oddly enough, Sunday turned out to be a weird day for Jesus. Like an awkward adolescent growth spurt, his left arm did most of the growing. It probably would have been terribly painful except for the whole holy thing. See for yourself (it's nothing short of miraculous). 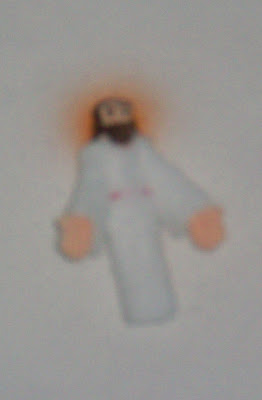 Oh, yeah! I know what you're thinking, holy crap that's a frickin' halo! And it is. I didn't notice it at first. In fact my first thought was, "Has anyone seen Giles?**

Today, we have some significant growth to show you. If you'll recall, when Grow Jesus was freed from his plastic shroud, he was about the size of a quarter in my palm. Now look at him. 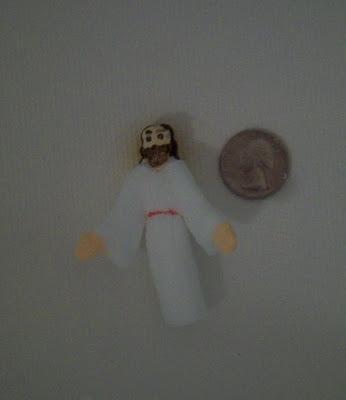 
That's it. Until next time. Please leave your prayers in the comments section. I fully expect my journal to become the next Lourdes.

*The big draw is the editor's comment: "there are no typos in this work."
**Obscure reference to John Carpenter's THE THING.