Zombies in New York? Just One. 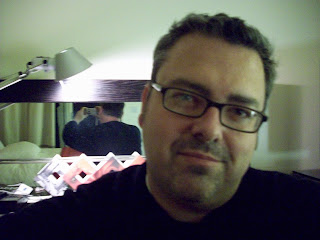 Oi. I'm in recovery people--and not in the sense that I've given up alcohol, cuz that'd be straight up nuts with a twist. No. I'm in recovery from New York City. I'd blame it on the time difference, except I know that's not it. It's the speed difference...and Speed Kills! To steal a line from Annie in Halloween.

But, I'm getting ahead of myself. Starting at the end is a bad habit.

Monday was an early one, so I packed the night before. Caroline dropped me off at the airport at 6:00, where I was securitized and prodded and flushed out into the most shopporific airport in the world. Too many food choices and a Starbucks in every corner, kiosk and bathroom stall. I like to get to the airport early to try to get upgrades because I've got these damnable long legs that end up twisted like pretzels in coach. This, I would be denied. No exit row, either. I resigned myself to discomfort and was settling in when I heard this:

"We've got a leak. The mechanics are going to check it out, fix it, and get us going as soon as possible."

My mind went to all the wrong places. Jet fuel filling the baggage area, fumes filling the cabin, and fiery death. All with the added bonus of physical discomfort while I awaited the inevitable woosh of ignition. You see, I used to fly a lot. My father was civil service and we moved with great frequency. I used to love to fly. But after awhile, the odds start to turn on you. That's how I figure it anyway.

Needless to say, we sat on the tarmac for an hour and a half waiting to die. I'm just assuming everyone else was with me on that. I didn't ask or anything.

Turned out the flight was fine and I'm just insane, but not so insane that I couldn't tell that our in-flight movie, Hairspray, was not nearly as good as has been purported. Do watch the original. Please. There's something missing like the filth has been scrubbed away, and that's a dirty shame.

The flight ended up being fine, of course. Got to JFK, got my bags and grabbed my shuttle to the hotel.

The first thing you notice about New York is the scale. You can imagine how big it is, all you like, but it doesn't prepare you for witnessing it first hand. The skyline just seems to go on forever. I'm not talking about Manhattan alone here, I'm referring to the whole thing, all the bouroughs. And that it was night, didn't help my overwhelming inability to orient, which is a totally new experience for me. I'm normally like a savant when it comes to direction and finding stuff.

Anyway. Here's the first shot of New York. I was too awestruck to take any of the twinkling skyline so you get Times Square. 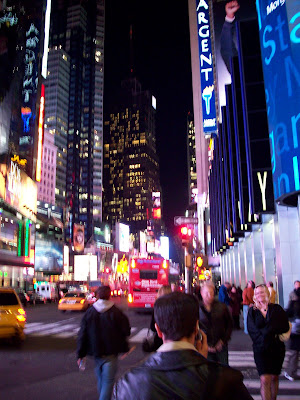 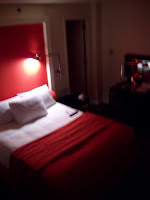 My residence for the week was The Time hotel (so named for its proximity to Times Square) is a trendy little outfit next door to the Eugene O'neil Theater and across the street from the stage where they put on Chicago. It was all floor-to-ceiling windows, minimalist furniture and a restaurant that opened the day I left. It also has rooms that come in primary colors (mine was red), which seems like it would be too bright, and it would be, except you get there and here's the view: 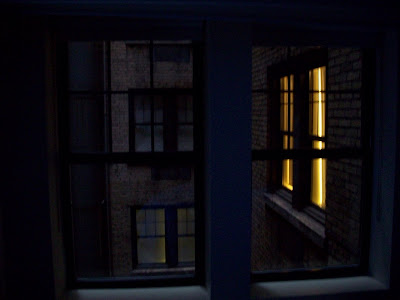 Magical, right? Before you joke, yes, that is mid-day sun. Tune in tomorrow to find out what I saw out of said window. The room is a cave, roughly the size of our master bedroom closet, which I guess is par for the course in New York and all for the low low price of $300 a night.

But lest you think I was being treated like royalty, understand that I paid for this trip myself. Not to visit family or friends, but simply to meet my editor and his peeps at Kensington, and to talk about the book and future projects with my agent. I can't guarantee that having the foreign rights agent, publicist, and sales team know my face and that I'm serious about this writing gig will pay off, but it sure as shit couldn't hurt.

Plus...I got some exciting news, that I'll share tomorrow.

sugar skull said…
Ooh Mark, you hit the nail on the head. Hairspray is perfect because it is so filthy. No one can out drag Divine. Now I have to pop a diet pill,see ya.

Oh! got any hints as to your YA series?