In the Valleys of Concrete and Books

After an absolutely great night's sleep--the hotel mattress was perfect and nice thread count sheets--I went to get coffee in the penthouse atrium. The view was amazing, and yet someone kept forgetting the camera. That'd be me. Coffee in hand, I headed back to the room and opened the shades to let in what morning light could make its way down the chimney to my window. I tried to connect to the internet with no success and since the coffee was awful, I grabbed the phone book to find a coffee shop. I was perusing the yellows, when I noticed the room across the gap and one floor up was lit up like a photo shoot--of the pornographic variety. Apparently, that particular hotel guest was proud of his body and in the mood for sharing. Now, exhibitionism is great in fiction--I'm all for it, in theory--but I was in no mood to process stranger nudity before my caffeine had kicked in, especially the hirsute variety.

Off to Starbucks and internet*, where I saw my first pseudo-celebrity--very pseudo--Jared Cotter from Fuse's The Sauce. You may know him from last season's American Idol, though he didn't quite make the final twelve. I spent a lot of time at the coffee giant on this trip. I figured I better do it now before the book comes out and the company bans my presence (you'll have to read HAPPY HOUR for that particular explanation).

My meeting at Kensington was set for noon so I meandered through midtown, getting a feel and my bearings. If you go to New York, you should know that jaywalking is a birth-right and the corner extends well into the street, no one seems to watch for the red hand to go white. When there is a gap, it's time to go. I learn quick. Along the way I saw Radio City Music Hall, voici: 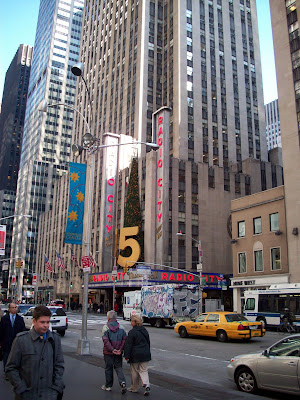 Rockefeller Center and the famous skating rink, which is surprisingly small. The Today show had finished filming or I would have gone over to look in the window like a crazy person. 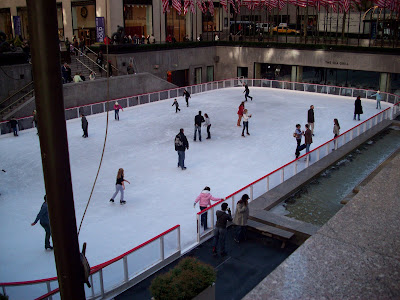 What I was most happy to find was St. Patrick's Cathedral, which is so beautiful... 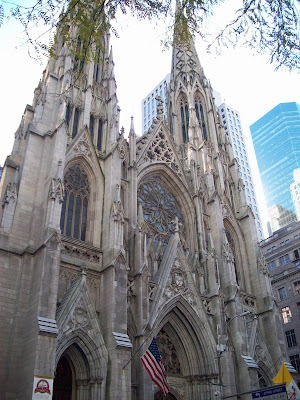 And had these amazing doors... 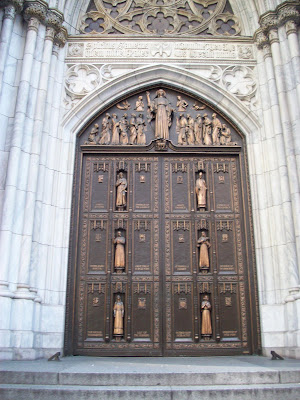 When I arrived at Kensington, I was a little sweaty, I have to say. It was only ten or twelve blocks max, but New York blocks don't have any comparison to normal city blocks, they are these mammoth stretches that are probably the size of three to four regular city blocks. It was so awesome to meet John, my editor, for the first time, and his assistant Peter, who seemed to be either excited about the book or just to meet someone who was as addicted to reality TV as he. We all talked I Love New York 2, which is totally insane this season and recast the Today show with Tiffany doing the news. John's office is wall to wall books, literally floor to ceiling. I'm not joking. Guess who scored some freebies, including the ARC of Rayo Casablanca's 6 SICK HIPSTERS, which I'm so excited to read. Then, he took me on the tour.

First up was the foreign rights agent, who had nice things to say about HAPPY HOUR and just returned from the big Frankfurt Book Fair, where they sell American books to foreign publishers. She was optimistic about making some rights deals, so that's great and she forced me to love her. I met my cover designer, Kris, and we gushed about Amanda and the shade of blue that makes the art so striking. I met my publicist, Maureen, who's lovely, and the sales team who are working magic, particularly a lady by the name of Helen, who I hear is a literary world legend. We ran into her on the way to the elevator, along with the publisher, who was pleasant and busy. Here's how the Helen conversation went:

John: Helen, this is Mark Henry.
Helen (in gorgeous NYC accent): Happy Hour of the Damned. I just did a huge order with Barnes and Noble and it's going on the tables.

How much did (and do) I love Ms. Helen? Um...a lot. Tables are big news, because the publishing house has to pay what's called co-op to achieve that kind of exposure. I was stoked, John was stoked. We celebrated by eating, because food is love. French Thai at Vongs, Tom Ka Gai and a chicken dish that was delicious.

At that point it was all about 70s and 80s horror movie trivia, books and future projects. John is a great guy and cheerleader for the book.

The rest of the day wasn't nearly as exciting, unless you consider running into Meredith Viera growling into her cell phone and chomping awesome cheese slices at a tiny pizzeria with an angry couple melting down in Italian exciting, which I do. I very much do.

Here's another shot of Times Square just for kicks and because I wanted a Rice Krispies treat from again Starbucks*. 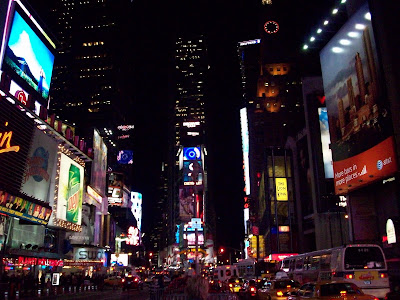 *A quick note on Starbucks pastry: it appears that Starbucks ships all these out from their Seattle vendors, same stuff. The further you get from Seattle the staler the bakery products. I'm just sayin'.

sugar skull said…
To think that you are in this amazing time in your life, doing the things people dream about, and it's all for a book about a zombie. Life is so very cool.
6:23 PM

Rayo Casablanca said…
And to think you got a copy of my book hot off the presses. Can't wait to hear what you think of it.
3:21 PM