Subways, Museums and the Papaya King

What could be more exciting than subway travel? Teleportation? Ricshaw? It's hard to be sure having never done done any of those. Lucky for me, my agent's office was far enough away that it forced me to explore transportation other than the aching bloodied dogs at the end of my legs.

Oddly enough, once you get past the dense urine smell and the proximity to tons of people in a damp basement, the New York subway system is surprisingly self explanatory, and it costs the same $2 as a decent cheese slice. The 6 train downtown took me to Union Square where I'd be meeting Jim. I got there early and couldn't resist roaming the artist stalls, farmer's market, and picking up a pie and some cookies (I hate to arrive empty handed and if I can't be emaciated then no one can!).

It was nice meeting everyone at Dystel and Goderich and Jim took me to this awesome hamburger place called Stand that had these amazing apple pie shakes, which are literally a slice of apple pie blended with ice cream, and made of awesome, as you can imagine. We talked about the zombie series and the new series, JOE, which I'm super excited about. Much speculation ensued.

Afterward, I was all about MoMA, the Seurrat sketches and Martin Puryear's dramatic wooden sculptures. Speaking of which: 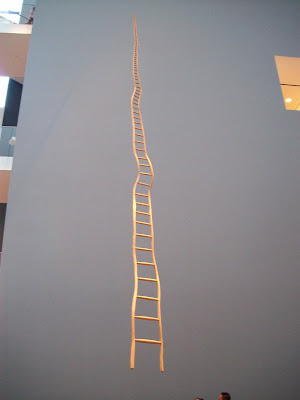 Yep. That's a ladder. Have to say, not so impressed. But I really dug the furniture design and in the photography galleries there were these amazing Dianne Arbus photos of the developmentally delayed wearing halloween costumes in a field. Brilliant. But back to the furniture. I've got devious blood splatter in mind for these Bouroullec modular bookcases: 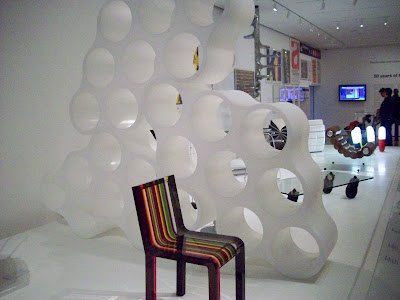 The painting galleries started on the next floor (there are 6) and I was awestruck. Multiple art history classes as an undergrad did the trick and seeing the masters up close had me weak-kneed. Here's one now: 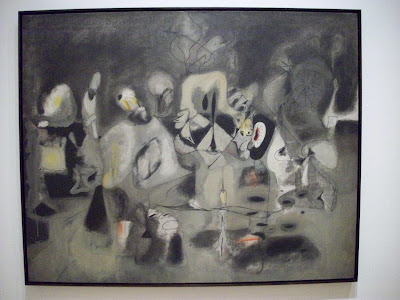 Arshile Gorky's Death of a Seducer. Dark, gloomy, and would look totally great on my office wall. Just in case you're wondering what to get me for Christmas. The Cezannes, Gaugins and Picassos are great, but I was all over the Rousseaus for some reason. I went to take a picture and then the unthinkable happened. A f**king tourist tragedy. My camera battery went dead.

Moment of silence for the end of MoMA pictures. So here's one last one of the museum itself... 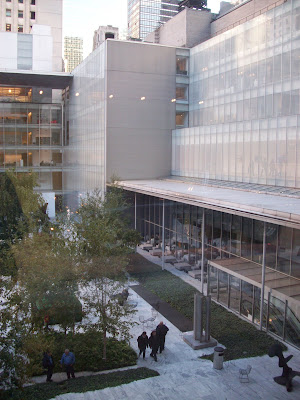 Everyone's favorite Anton, Anton Strout, met me outside to grab some dinner and conversation, which was awesome, loaded with World Fantasy Con recap and book release strategy. It was great to finally meet my zombie nemesis. You're wallets will be damning us both to hell come February 26th. Muhahaha.

My last day in New York found me scrambling for a new camera battery and sadly, denied. I checked out of the hotel and took the subway up to the Metropolitan Museum of Art. I'd only alotted two hours (those who've been there will be laughing just about now), which won't get you very far in such a monstrous building, where entire egyptian temples have been recreated and dead great white sharks float in massive tanks of formaldehyde. I did get to see an awesome Chuck Close painting, which is photorealism and if you don't know his stuff, look him up. The European masters were, again, overwhelming. I'm in love with the Vermeer maid.

After I grabbed hot dogs at Papaya King, which is a must--they've got these snappy casings and toasted buns that I guarantee you'll love--and then back to the hotel to catch my shuttle out.

The big question: was it worth the expense? Absolutely. For any writer that is experiencing a lull in creativity, nothing can get you jumpstarted like meeting all the people that are depending on you to get off your ass so they can do their jobs. I got some great ideas for a forthcoming villain from, of all places, the Seurrat exhibit. Yes. He of the happy little scenes of lakeside lounging. Dark pencil studies make me think of victorian s&m, what can I say?

After a sort of scary start, I'm almost surprised at how much I want to go back. Can't wait to show Caroline around, and next time actually see some big touristy things (shows, Ellis Island, Central Park). We'll need at least a week.

Ciao, off to plan.

Joe said…
Mark -- Wow, great pix and sounds like a terrific trip. Wish I could've been there. We could drink the news of your big co-op deal for B & N...sweet!

Meanwhile, I was moving everything I owned in a ten foot truck...over...and over. Yeah, it was pretty cool. My new doorways look a lot the ones in St. Patrick's, and the blood gushing from my damaged knuckles was almost as lurid as those big city lights.

So, yeah, big weekend all the way around.