It's impossible not to notice the avalanche of sci-fi/paranormal shows this season. Every time you turn on the TV you've got one at the ready, be it Journeyman, Reaper, Pushing Daisies, Bionic Woman, or Moonlight--and those are just the new ones. Try to keep up with the returning shows like Blood Ties, Medium, Heroes, Smallville, Supernatural and The Ghost Whisperer (I can't believe I even typed that last one). Anyway, it's hard to keep up. It'll be even harder come mid-season, when we have to mix in New Amsterdam, The Sarah Connor Chronicles, Heroes: Origins, and True Blood. It seems these days, with TIVO and DVR and Online episodes, you needn't watch a show that doesn't involve a mythical creature, robotics, or superhero-type powers.

There's really just no excuse for not being a couch potato.

So, I watch and watch and watch. Every year, I like to pick my top three new shows. My favorites. Despite knowing that these will inevitably crash and burn and be cancelled prior to any real climax or resolution. It's happened before *cough-Dead Like Me-cough*, and it'll happen again. Take, for instance, The Great Spec Crash of 2005, I'm talkin' about the Surface, Invasion, Threshold debacle. Those were my three and I loved them. How did you like last week's episode? Oh...not on? That's right. I'm the grim reaper of the fall season and here are my picks...

This one makes the list simply for Katee Sackhoff. I love her. In fact, I wish she was the lead character and that they'd taken the remake the way of Battlestar Galactica into darker territory. Does anyone have to stop themselves from doing the tch-tch-tch-tch sound during stunts? Could be just me, never mind. Anyway, I'm giving this one a weekly shot, it's kicking Moonlight off my Tivo. That said, it's probably a goner. 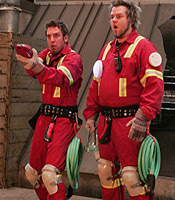 Oh, how I love this show. The actor that plays the devil, who I totally can't remember his name (he killed Laura Palmer, though), is so funny, I'd hunt escaped demons for him without a contract. The main guy and his sidekick are likeable and the dialogue is clearly Kevin Smith. You can't not watch it. It's impossible. 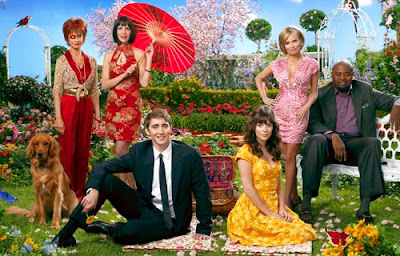 Just watched this last night, and really Pushing Daisies prompted this post. If you didn't catch it, think a young Kevin Spacey as a necromancer in love, making his way through a fantastic world that is both Seussical and Jeunetian (coined!). The show was awesome. I think my mouth was hanging open through half of it. The characters are bizarre yet engaging and the whole thing is as vivid as an absinthe buzz. I could watch this, a lot.

Please let me be wrong. Please.

Joe said…
I haven't seen any of these shows. I wanted to see Reaper but I work nights. What makes it much easier is if they're available On Demand. That's how I watch Mad Men.

You love Ghost Whisperer. You know you do.

I was shocked to find out about a pseudoshow called Day Break. It starred Taye Diggs as as detective living the same show day after day. What was creepy is that I pitched this exact idea about two or so years ago. At least it failed.
1:39 PM

Mark Henry said…
Was Daybreak on longer than a minute? I couldn't bring myself to give it a chance.