Through the magic of the Target seasonal department, our home has been officially transformed into Halloweenland. Take the mantle, for instance, I couldn't shove anymore up there if I had a vat of KY and rubber gloves. And before you say anything, I just don't want to. 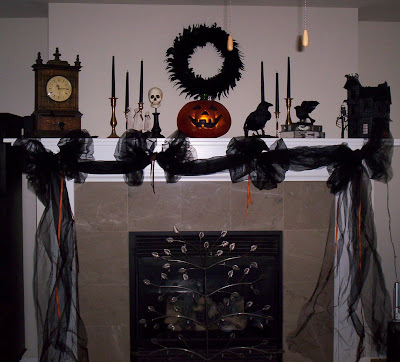 Halloween's become as big as Christmas around the Henry household. Next year we'll spray paint the old fake tree brown and trim it with skeletons, brains, and ropes of dried sausage casing (well maybe not that last bit). It started with some hard times a while back--it's funny how that works--but coming out the other side we wanted to do something special and Halloween was the next holiday. Plus, we're crafty.

The hard part--as all you Christmas fanatics know--is opening up the boxes of decorations and locating the inevitable packing casualty. This year, ours was the big crow; its beak bit it. Poor thing is barely hanging on.

The decorations are just part of the tradition. Next Saturday, we'll be hitting the local pumpkin farm with the God-daughters and doing the whole corn maze/hay ride/pick through dirty pumpkin-thing. Followed inexplicably by Chili and Cornbread (don't ask).

Then comes the Thirteen Nights of Halloween, which we've been observing long before ABC Family stole that shit. Readers know we're horror movie junkies and this year's list may be the best ever. Check it...

So that's the that.

What are your Halloween traditions?