Mixed Bag and No Candy

Last night, we went to see Rob Zombie's remake of Halloween. You all know how much we love Carpenter's version (enough to name our dog after a character). That's a lotta love, people.

We weren't expecting to like it, and so weren't at all disappointed. The reason the original Halloween is so effective is that Carpenter takes the time to build tension, he has a well developed understanding of fear and can relate that to the audience. Rob Zombie--and I totally understand the risk he took--followed a path that is counterintuitive in regards to the mechanics of horror. 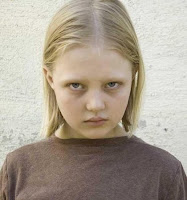 I won't deny that Michael Myer's childhood is interesting, as are the scenes at Smith's Grove. Zombie shows us a family that is perfectly capable of producing a psychotic killer, as well as the fledgling steps a child's mind takes toward active destruction (emotional/physical abuse, animal cruelty and killing). The young actor playing Michael did an awesome job portraying this. As an aside, I've met three children over the course of my work, that I thought were not only capable of murderous acts, but had already begun to show the signs that are indicative of those predisposed to become serial killers. They are fucking scary kids, and vacant as Hell. One of these three went on to stab his mother several times (17 to be exact). Back to my point: Zombie did a great job with the new material, and that kid, Daeg Faerch, was awesome.

The movie fell apart when Zombie brought Michael back to Haddonfield. He'd spent so much time deconstructing Myers as a character that when it came time for him to start the slaughter, we didn't know Annie (played by Danielle Harris, the little girl from Halloween 4), Linda, or Laurie enough to care whether they died or not. Annie's death is by far the most important to the first film. Carpenter infuses that scene with so much tension that viewers are forced into a fetal position. Zombie doesn't take that kind of care, he slices through the cast with a vengeance. Sad, really. Only the final sequence between Michael and Laurie is frightening in any way. Mostly it's just frustrating.

You know what else was frustrating? No popcorn and/or M&Ms. Yep, people we're still on the diet that has no end. I'm down fifteen pounds in the last month, so I can't complain too awful much. The daily workouts are tiresome, but I have no intention of easing up.

Second thing, What the fuck was Britney doing on TV last night? She's at least a year away from any comeback potential. She looked like a zombie shambling around up there, having to rely on her dancers to help her up and down the stairs. Miss Teen North Carolina's dumb and all, but at least she can manuever stairs. Was she drunk? Her lipsync was off. She looked bloated. The audience was horrified. I had to cover my eyes a few times. Does that train ever stop wrecking?

Third and last thing. I'm taking a cue from the amazing J.A. Konrath--an accomplished author of the sick and twisted variety and the end all be all of author blogging--I'm going to do a weekly post related to things writerly. That's right. You'll get my take on everything from turning your crappy manuscript into a well-polished turd fit for scat lovers everywhere to publicity stuff that works (by the time I get to that, I'll have made tons of mistakes to learn from). So tune in, Bitches.

Oh wait. I've got a big announcement coming up. Huge.

Joe said…
I almost saw Halloween last night. Opted instead for Superbad, took a seat in the exact geometric center of the theatre and put my feet up. (In my part of the world, when you go to the last show on a Sunday night after the flick's been out a few weeks, you're pretty much guaranteed a private screening.)

I liked it but not quite as much as I'd hoped, not as much as Knocked Up. How much mileage is really left in the gross out teen sexmobile? The actors took the standard material at least an octave up in quality.

Despite all I've heard, I'm still tempted to see Zombie's Halloween, if only for the creepy kid factor. I'll definitely rent it. Even when he's wrong, he's still a little right. Is it kinda sad that that's still enough?
2:54 PM

Mark Henry said…
Oh c'mon. There are scenes in Superbad that were automatic classics. That period stain gag was worth the cost of admission. Admit it.

I loved Knocked Up, but not as a laughfest, more in the charming-everyman-gets-the-girl kind of way. Either way, Seth Rogan is becoming a huge star.

As for Halloween, just got off the phone with Caroline, and we agreed that it wasn't that bad of a flick, in fact the first part of the movie might be enough to forgive the second.
3:09 PM

Joe said…
No disputing the hilarity but to me it was more buried in the performances. I was actually grooving more on the back and forth re: testicle positioning in too tight jeans ("it's like a division sign") and the goofy home economics flour kitten-whiskers. To me, the true payoff of the period stain was when Seth pleads his case to the jealous boyfriend and, almost forlornly, observes, "We're blood brothers."
5:33 PM