The Glamorous Life of the Debut Novelist

Mark's laughing his ass off today. He's not been told a joke or anything, he's just coming to understand the extent of his role in marketing his book. You see, today the Fed Ex man delivered two big boxes, both from Lake Charles Manufacturing in Louisiana.

...and you've got to be wondering what's inside, since they're clearly not from Kensington, they can't be advance reading copies--plus it's way too soon for those. So what could they be? 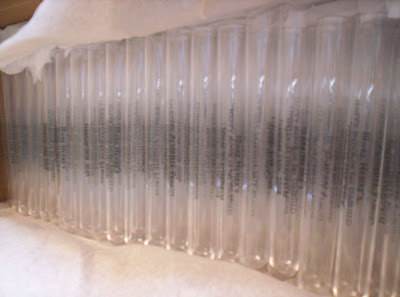 They're test tubes. One thousand of them. It seems Mark has some secret medical experiments going on in his basement. Well that's not entirely true, while the work is experimental, our protagonist doesn't have a basement, nor any medical training to speak of. So instead, he'll be spending the weekend filling these sexy little numbers with book-info scrolls (and zombie plague-shh!) and snazzy red stoppers.

Each one is printed with the following...

Let's see if you can see it in this blurry video...

Nope, how about a picture? 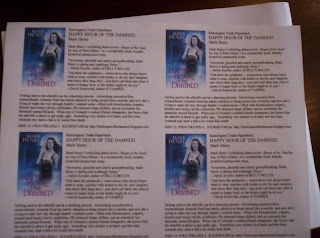 The book-info scrolls are in color at the moment, but may not stay that way. Mark was quoted $197 for 250 color copies (4 scrolls on each). That's probably not feasible. As it stands, he's already $200 in, and still needs postcards, and business cards. Ah...how he dreams of being an established author, to have the financial might of the publishing house behind him.

So what are these for? Three purposes.

The first, in an effort to build a local presence, our hero will be visiting all the local bookstores and talking to the booksellers, at which point he'll pass off some of this nifty swag (which so happens to have all the information needed to order HAPPY HOUR for the store shelf). Sneaky, no?

Second, Mark'll be giving these out at readings and signings just 'cuz they're cool and he loves them.

Third, Mark will raise a bellowing, "Muhahaha," when the tubes are opened, unleashing the last great zombie plague!

*this post brought to you by the word "shameless"

Joe said…
Can I drink this Zombie Plague? Will it get me a little bit lit up on a Friday night? Or is it something even more seductive from the land of the exploded meth lab? I worked in bookstores for ten plus years and I got to tell you nothing gets a bookseller's attention faster than a mysteriously fetching controlled substance.
5:48 PM