Eight Things About Me

Myspace and livejournal friend, Xakara, "tagged" my like an endangered species. The task? Eight random things about myself...

1. When I was a child, I started taking "dark showers." I'd pretend I was blind and walk around in the dark bumping into things. Bathrooms happened to be the trickiest, and wet tubs can be particularly dangerous and, thus, alluring.

2. About ten years ago, my 5 pound yorkie ran away. I caught up with him at an intersection leading to a freeway, but he was too freaked to recognize his name, or me. He ran towards the freeway, I chased. A car hit him, and he was bounced around the road. I ran into the middle of the speeding cars, pulled him from the concrete and collapsed in the ditch, covered in his blood. It took a few minutes for my heart to stop racing and to realize his was still beating.

3. I've started collecting old crosses and religious iconography. My favorite is a Greek Orthodox Crucifixion painted on a crimson background and layered with gold leaf.

4. The first time I tried Indian food was in a tiny restaurant in Chiang Mai, Thailand (One of the three cities that form the Golden Triangle of Opium production). My parents hated it. I loved it. It took me ten years to try it again and now I can't stop.

5. I worked at a mental health facility, after I graduated from college. The clients--we called them consumers--were suffering from a variety of psychoses. Unfortunately, the mental health system is cash poor and graveyard shifts are often understaffed, and by that, I mean just me. One of my tasks was to do room checks every hour to make sure the consumers were in their beds. On one of these checks, I'd finished the rounds and was walking back to the staff wing, when I heard a creaking behind me. I turned. A particularly venomous Borderline (look it up) was standing behind me with a chair over her head ready to bring it down on me. She met my gaze, cocked her head, put the chair down in the dark hallway, and returned to her room without a word (from either of us).

6. When I was seven--we lived in Portugal at the time--our house bumped right onto a cobbled street. It looked like any other building from the front, whitewashed walls, ten foot rough-hewn doors. The ground floor entry was a cave, not literally, but dark, stony and damp as is typical of the architecture in that area. It was a bit of a dungeon, and the landlord, a fisherman, retained a weight making shop behind a locked door. That place was always a mystery. I'd sit on the cold stone stairs and watch the shadows play under the crack below the door, imagining the fisherman as an alchemist. A wizard.

7. We lived near the Westpoint Academy in New York,--I was five at the time. Occasionally, we'd have dinner at the large hotel on the Wespoint grounds. Now, I was prodigy in the hijinx department and snuck away from my parents on a regular basis. I got stuck in the elevator and couldn't reach the buttons. I cried. 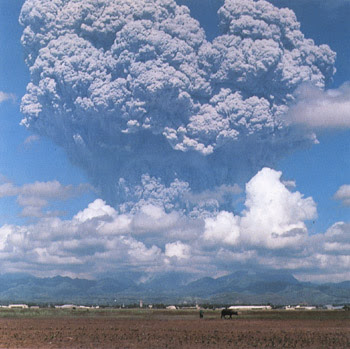 8. In 1991, I visited my parents in the Phillipines (my father's work took him all over the world). While I was flying across the Pacific, Clark Air Force Base was evacuated as nearby Mt. Pinatubo seemed likely to erupt. Although civilians, my parents were told to leave. When I arrived in Manilla, the volcano had already sent several small plumes of ash into the night sky. The driver took us to a nearby naval base, where the Americans had been relocated. When the volcano erupted, it was catastrophic. The sky was black for 30 hours, a typhoon rolled in, and the earthquakes rolled continuously. Debris fell on the evacuation site killing many in the surrounding towns and collapsing a gym on frightened families.

Consider yourself tagged, or not. But tell me something people! I'm bored and have access to sharp objects.

Mark Henry said…
It was widely underreported at the time. People don't realize the immensity of that eruption.
8:04 AM