It's that time again. Or has it already been two weeks and is now overdue for that time? Whatever, here it goes...

The people who brought you Shaun of the Dead are back with a f**king hilarious send up of American buddy cop shoot 'em ups. Simon Pegg is up front again as the best cop in England, that none of the others can stand. He's soon shipped off to a small town where no crimes seem to ever occur, just accidents. A lot of accidents. Really gory ones. High-effing-larious. You're going to need to just buy this one.

Sure, it's a bit of a drive from where you are but Old School is awesome in a New York way, and well worth the quest. From the late 1970's/early 1980's posters that festoon the walls--think Burt Reynold's centerfold from Cosmo, Olivia Newton John circa Let's Get Physical, and the original Breakin' 2: Electric Boogaloo movie promo--to the barely washed staff (don't let it bother you), you'll be transported to a place where the pizza is all that matters. I always get a cheese slice and then something off their special menu. The cheese is stringy, the crust is thin with a crisp handle, and the sauce has just enough oregano. The red pepper and roast potato Sicilian was an awesome slice. Hit 'em up. 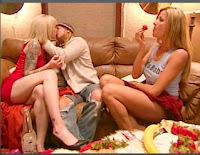 3. Rock of Love with Brett Michaels

If you thought lips were smacking with gonorrhea on Flavor of Love, you won't be able to contain your judgement here. This pack of drunken bleach blond skanks seem genuinely interested in Brett Michaels and will do anything to prove it. Anything. I can smell the bread baking, now. Oh wait, that's a yeast infection. Brett, himself, can't seem to make it through an episode without clutching his crotch and complaining of frequent erections. It's fantastic, plus it leads into Scott Baio is 45 and Single, and we all know what a train wreck them shits is.

Stacia said…
But will you be watching, or did you watch, "The Coreys"? I believe it debuted the other night...
1:08 AM

Mark Henry said…
I'll give it a shot, I'll have to catch one of the many reruns, though.