The Official Road Trip Rant, Part Five: The End of the Road

So we come to the end of the journey, four big rambling shit-filled entries about a road trip. Who'd want to read that? I've been asked. Hell, I've been wondering myself. But, I did it anyway. Mostly as a distraction from my husbandly lawn duties.

We left Jackson Hole, and our jacuzzi spa for two, far too early in the morning. Not because we couldn't sleep. Far from it. We'd reached that point on a vacation where you just want it to be over. That, and we'd run out of clean clothes--not, I repeat, NOT underwear. So after a quick over-priced breakfast we sped away from the beauty of the Tetons and into some of the flattest, driest terrain so far. Southern Idaho.

***this is where you blink and magically we're in Boise***

Boise is a surprising slice of corporate America, with every major themed restaurant you can imagine and a 21 screen cinema with Imax. It was culture shock, after the past week. So what did we do? Um, are you an idiot? We went to the mall, to get fresh clothes and eat bad pizza. What else would we do? I couldn't convince Caroline to go see Hot Fuzz so we ended up vegetative by 10 o'clock.

Although this is a horrible shot, it's the only one I have of Boise. I call it.. 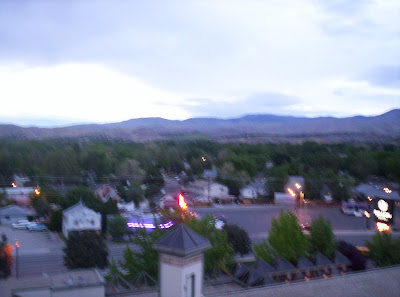 Beyond the Balustrade: Dusk Over Titty Bar

Day 10: The Snows of ... Wait, Aren't these just Hills? We're Gonna Die!
The final day was kind of a blur, with some real notable standouts. We'd tried to prepare ourselves for the longest drive yet, by getting up at 5 am. With the time change, that would give us 13 hours before Caroline started her first class of the summer semester. Sure it's a lot of pressure but remember, we've actually gotten some sleep in the last two days.

Once across the Idaho/Oregon border, we started travelling through hills, which never seem to be elevating to any noticeable degree, and with a Civic Hybrid, you can tell when there's an incline, believe me. So imagine our surprise when this shit happened... Now, we're no snowchondriacs, but it was a surprise, plus it was sticking. We were certain that the next corner would find us sliding to cliff's edge and toppling to our deaths, or at least the few feet to sea level. This is not normal people. The Pacific Northwest rarely sees snow at all, let alone in May.

A short drive later and we were coasting along in the warm sunshine through Pendleton Oregon. You know the place; it's where they make all those faux indian blankets. Only we didn't see any factory. Just a huge state prison complex. Do you think they're one and the same?

And if so, is this the kind of corrections that need to occur to make cuddly blankets and soccer mom sweater sets?

'Cause I'd just like to know. I'm fine with it, anything for a warm blankie. But someone could just clue me in, otherwise I'll assume that these are perfectly acceptable motivational techniques.

Now before anyone starts getting up in arms, I'm aware that the above image may be disturbing to some. Let me just say, I apologize for the soldier's Dorothy Hamill haircut, well in advance. So just hold your comments, PC minions.

After Pendleton, the freeway curls up to the Columbia River Gorge which is amazing and beautiful and windy as Hell. 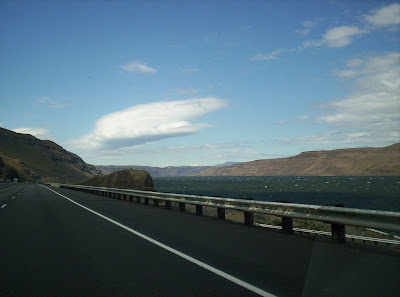 Do you see the whitecaps?

We stopped for lunch at The Dalles, which is this town that's grown up around a Dam. It's at the local Taco Bell that I began a tragic diarrhea episode. Barely making it to the toilet, I found that I needed to start a new roll. The stall was equipped with a double set of the largest toilet paper rolls imaginable, the new one, which I was unfortunate enough to encounter had apparently no beginning. I ended up scratching at it until the stall floor resembled a hamster cage. Finally, freed from my porcelain prison, I was welcomed to the dining room by a bus full of screaming high school students. My wife pointed out that these were no ordinary High School Students, but the stupidest of all High School Students. Apparently, one of the aforementioned High School Students was concerned that since her VISA debit card said Washington Mutual on it, she would not be able to access cash from an ATM in Oregon. The kicker: her eleven peers agreed that she was shit out of luck.

We got the hell out of there.

Thanks for going on our trek with us. I wish all you bitches some Happy Road Tripping!!!

Rebecca said…
hello and congratulations on your book sale!!

You probably really should get on with your 'husbandly lawn mowing duties' instead of writing interesting blog posts like this....
2:07 PM

As to the second part of your comment, I'm considering allowing the lawn to go a toasty golden brown, under the politically correct guise of water conservation. That should put an end to that pesky matter.

Consider this your new hangout, I'll make tea, just don't expect me to wash the cups. Things can get a little dirty around here.