Reading Joe's post about summer camps for pyromaniacs got me thinkin'...

In Washington--probably other places, as well--we force our children into 6th grade humiliation camps. These "camps" are hidden deep in the woods, far from fast food and civilization. There purpose is to break the child's spirit as they prepare to enter Junior High. Noble enough.

I remember it, well. 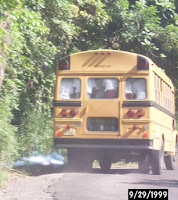 I'd broken my arm the week prior, so shoved in my duffel along with my tees, husky size jeans, and a few books, was a box of garbage bags to tie around the cast. As if an 11-year old is conscientious about those things. We gathered at the bus bay an hour before we'd normally show up for school. The teacher and some parents marched us onto a bus that hadn't been cleaned all school year. The scents were, obviously, old grandma dust, prepubescent butt, and the hidden Twinkie molds of doom. That would have been bad enough, had we not stopped at two other school to cram more kids in. By the time we got rolling, the seating was so cramped you'd think we were headed for Treblinka.

Two hours (days) later, we arrived. Pilgrim Firs, as Diana Fall put it, looked just like Camp Crystal Lake from Friday the 13th. Smattering of cabins amidst the evergreens, big lake with floating wooden docks, archery range, nowhere to run. We were going to die. Now, Diana was known for two things. One, her ability to get into R-rated movies, and two, wearing Big Mac overalls that pooched at the crotch, transforming her into Southgate Elementary's first trannie student. That kind of a fashion statement takes guts, so you know she's pretty reliable.

I didn't know it then 'cause I hadn't seen the movie, but as it turned out, Pilgrim Firs WAS remarkably similar to that early slasher flick. With one notable exception, Mrs. Voorhees got it right: those counselors deserved to die. 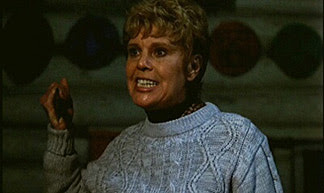 I'm not sure how I arrived at that opinion, exactly. Maybe it was the late night flashlight raids on the cabins. Or perhaps, the death march into the hills, followed by the terrifying tale of the hermit who stalked and killed children the year prior. Maybe it was the whoreanus singing at campfire. Who knows?

Which leads me in a roundabout way to my point. The criminally neglected Burlesque of the Damned top ten list. I decided I had so much fun with the previous audience participation list that I'm doing it again. I'll start you guys off with number 10. Add yours in the comment section and I'll try to rank them fairly.

10. Personality Disorders. Let's examine the type of individual drawn to volunteering to be a camp counselor. They seem to fall into two groups, peppy overachievers (ala Election's Tracy Flick) or sick sadists (see: Marquis de Sade, wickepedia, or your average meat-headed jock). As far as I know there is no in between. Reason enough! 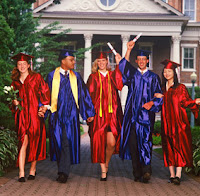 9. College Bound. "Some people take on extracurricular activities, in case it impresses the university admissions staff," Tez says. "All the universities I applied to rejected me, possibly because I wasn't a camp counsellor. I WANT REVENGE!" Valid points. Kill Kill Kill!
8.
7.
6.

5. Teen Sex. Joe Schreiber (EAT THE DARK) writes: "skinny teenager counsellors in cutoffs looking for a chance to get naked together in some musty cabin where dust motes stick to sweaty bare backs and the only way to scratch that itch is with a butcher knife." Absolutely. Sex is the product of dirty filthy minds. There's only one response.

2. Masochism. Tez Miller suggests, "Anyone who signs up to work with children is a masochist, and therefore won't mind being hurt." As a former child therapist, I can assure you she's right, now where are those Goddamn nipple clamps?
1.

Look at all those empty spots people! You've got work to do.

Joe said…
Okay, so it's been a long time since I've seen a summer camp slasher flick and even longer since I've actually been to camp. What I recall from both instances are skinny teenager counsellors in cutoffs looking for a chance to get naked together in some musty cabin where dust motes stick to sweaty bare backs and the only way to scratch that itch is with a butcher knife. I say we make our own camper movie -- set it in a camp for cutters, and the counsellors are all soft gentle new age spiritual types. Now THEY would deserve to die.
2:48 PM

Anonymous said…
Because how déclassé is working for $5.50 an hour in the woods? The world has enough poors. Kill them all.
1:39 PM

Mark Henry said…
I'm going to need a name, if you want to be a part of the top ten, kind sir (or madame).

Besides, here at Burlesque we prefer to eat the poor.
4:06 PM