Day 3: The Last Toilet on Earth

We departed Billings bitter for spending too much time searching for espresso; it's a good thing City Brew had decent coffee or we'd have brought the place down-such is our standard morning mood. But never a couple to dwell, Caroline and I headed off to Crow Agency and a shortcut (cue threatening music).

The Crow reservation is about 45 minutes out of town and promises to shave an hour off the drive to South Dakota. It has a billboard that says so, and everything. So it had to be true. 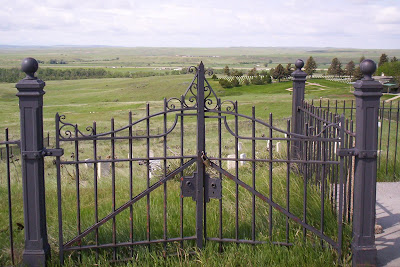 Any guesses? Yep, that's the spot where Custer fell, and let me just tell you. Last stand, my ass. It was a massacre, those troops were surrounded and just sat in this little pockmark on the hill. Yay indians! They get the last laugh, too. Because their memorial is way cooler: 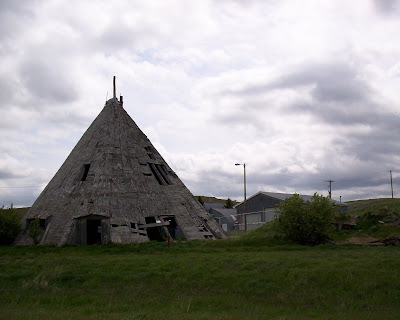 Oh, wait…Oops, I'm sorry. That's a dilapidated teepee thing we passed on the res highway. Seriously, even this is cooler than the Custer monument, which is just a stone pylon. I guess I'm forcing myself to move along. So, the road is two lane and empty. We get about fifteen minutes down and a road work flagger has us pull over and threatens that the speed limit is 25 for the next 9 miles. This is more difficult than it sounds, since I'm velocitized to 75, and have felt the need to relieve myself. But we make it through...

to the reservation IGA.

Now, I wish wish wish I had the nerve to bring a camera into this grocery *gag* store, but I couldn't bring myself to, for fear of embarassing anyone by taking a picture of the WALL OF SHAME!!! You know how some stores will tape up bad checks as a deterent? Well the IGA probably used to do that, before things went horribly wrong. Let's say you grabbed a couple of bottles of water and a bag of Funyons for the road--you have to buy something to use the john, right--and you're waiting quietly at the cash register for your total, when you start to see names (Shoulderblade, Little Deer, etc.) in huge block letters across the front wall of the store. Next to these names are their totals ($300, $500), big grocery money. Above them all, and there are tons, it says:

The Following Are NOT Allowed Back In The IGA Until They Pay!!!

We must have looked like epileptics in our silent laughter. I was almost ashamed. Almost.

Which is why, even though I used the IGA's padlocked unisex bathroom, I had to go again within a half hour. That's right: Karma. Why can't I be sensitive? Unfortunately, this is what I was looking at instead of another toilet: 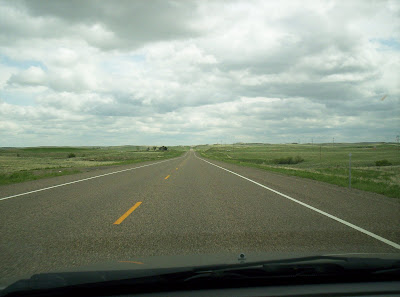 For TWO FUCKING HOURS. And before you question why I couldn't just piss on the side of the road or in a bottle, know that it is super windy, and number two was knocking. When we finally came up on a gas station, I had that loosening feeling of proximity, it turned out to be closed due to a "County Wide Power Outage." Hell, people.

The next restroom is in South Dakota. Long story short, I make it, but only because I do my kegels. And you do save an hour going through Crow. It's true. 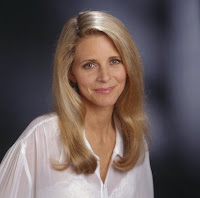 We get to Rapid City, check in and play with the sleep number bed at the Radisson, which is not nearly as comfortable as this woman would lead you to believe. So that night we eat at Fuddruckers, which is not nearly as sexy as it sounds. I'm probably not telling you anything you don't already know, and I'm sure you all have a Fuddruckers, since we saw them huddled everywhere but Washington. Bear with, it was our first time, and those chili cheese fries were not gentle. Nor was the Ben and Jerry's Cookie Dough Ice Cream that Caroline tore through, for on that very next morning…

Diarrhea is one thing--I've been cursed with a certain stress induced bowel liquification as many of you know. Vomiting is another, Caroline's morning of sour stomach, quickly turned into a pukefest. Twelve times, my poor baby hurled. Let's see.

It started here and here:

And wait, even at Crazy Horse: 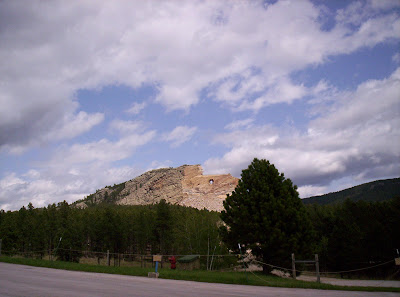 What's George looking at in this next shot? 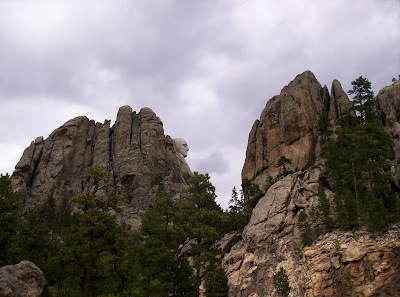 That's right, we pulled over for another bout with the vomit. So, I'm getting pretty stressed out. We're in the middle of nowhere. No Pepto anywhere, and this is beginning to seem like either motion sickness or food poisoning. She wants to continue. We get to Rushmore, and I take off to the bathroom, due to my stress-related bowels, and promptly drop my shorts into what?

Did you guess piss? 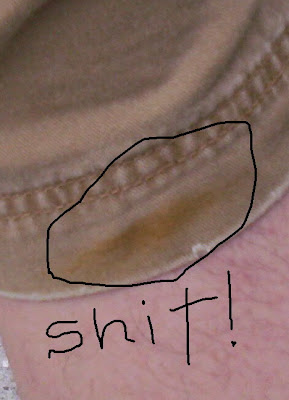 What else would you expect to be on the floor of a public men's room than a Hershey's kiss-sized dollop of the icky brown? My day's complete and we call it done. Here's the money shot on Rushmore: 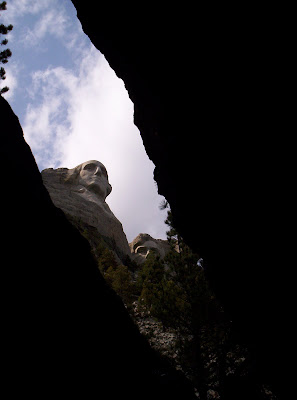 My favorite, from inside a little cave. Do you need an ending? Alright. I talked to a pharmacist at Albertson's. We decided it was either bacteria or food poisoning. She Pepto Maxed it.

Next up: We Spelunk but Don't Ask us to Hike to Medicine Wheel.