Day 5: There are No Jewels in this Cave

The morning started off smooth. Caroline's vomiting transformed into a warm bubbling caldera of diarrhea (and Yellowstone was another two days away, even), but the Pepto made some impact, and she felt well enough to do the Jewel Caves. So we were off. Now when I mentioned spelunking, I think some of you thought we were attaching ropes to ourselves or donning those funny hard hats with flashlights taped to the top. Let's clear that up right now. Our spelunking is caves with stairs, artificial lighting and a park ranger guide. And that's what we got, albeit moderately strenuous (over 700 stairs) and very deep 300 some feet down.

There's some weird shit in those caves and not Caroline's no matter what the Rangers say. Here's some of the pictures that turned out: 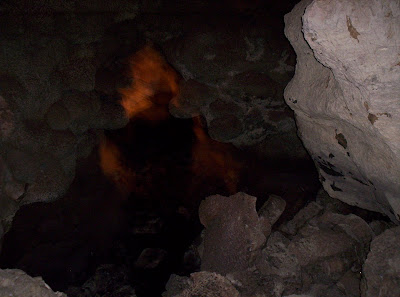 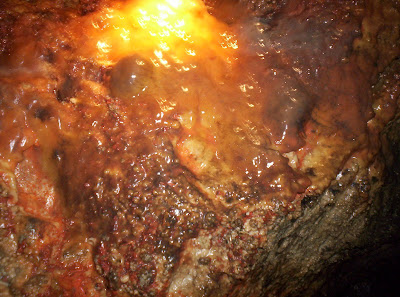 I know it looks like vomit, but that's actually stone. Gross, right? 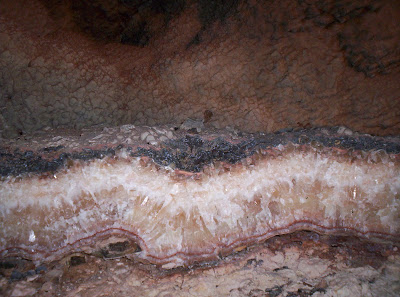 The closest thing to jewels were the veins of crystals, like this one.
Don't touch, bitches!

The ranger kept threatening that if we touched it we'd be prosecuted. He did enjoy trying to scare everyone, which was cool. He turned off all the lights, which was so amazingly dark it made the hills outside Coeur D'Alene seem like a disco. He told a story about how cave explorers had to fit through passages 7 1/2 inches high, by turning their heads, exhaling until their lungs were empty, and pushing through with their toes. Claustrophobia, anyone?

My favorite picture didn't turn out, so let me describe: there was a formation down there called cave bacon. Actually the name is self-explanatory. Totally cool, like a 6 foot tall piece of bacon hanging on a wall. But is it art?

From the Jewel Caves, we embarked on the biggest waste of time ever, The Mammoth Graveyard. Sounds really cool, right? Not so much. It looks so fake and it's really just this dig where they've replaced all the bones they've found with plastic replicas. It made me want to vandalize, until I saw this... 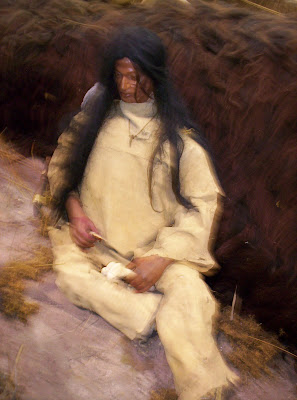 I know it's blurry, but that Indian's holding his bone. I nearly peed.

Tourist shit done for the day, we took in 28 Weeks Later, which was pretty fucking great, as far as sequels go. Except for these Rapid City Girls sitting in front of us. It seems they'd bought out the candy section, and were hyper as hell, shouting the answers to the pre-movie trivia, over and over. Luckily for us, they lapsed into diabetic comas as the previews began. And just as I was about to stand and yell, "We're from Tacoma, bitch. Don't you know I got a gun?"

Day 6: The Devil's in the Tower, or Too Lazy to Hike to Medicine Wheel

Three day's of Lindsay Wagner's Torture Number Bed was enough for us. We were more than happy to vacate the Radisson. We hit the most incompetent Starbuck's ever and nearly hurled on the dry pastries that could only have been pony expressed to South Dakota from Seattle. Time to go. But wait, two quick South Dakota items… 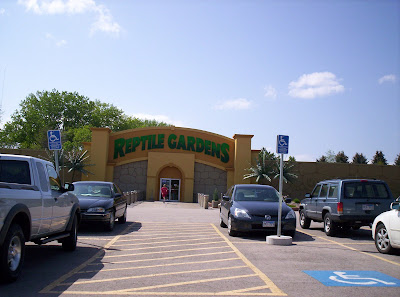 When I was nine years old, we moved from Portugal to Washington, driving all the way from New York. One of my fondest memories ('cause I'm a sick fucker) took place in this parking lot. I had whined and badgered my parents to take me to the Reptile Gardens until they gave in, and it's okay as far as roadside attractions go (we didn't go this time), but when we got back to the car, my father saw that someone had slapped a bumper sticker on the car. He went ballistic. I glowed.

Next up, what is the last thing you'd expect to find in Rapid City, South Dakota? Come on, humor me. How about... 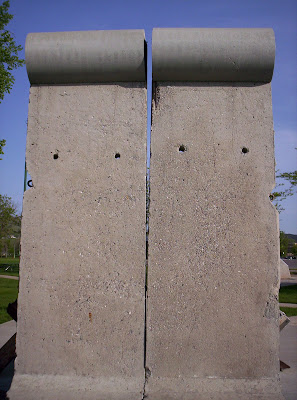 ...the Berlin Wall? Didn't see that one comin' did ya? I remember the wall from a youthful visit to Germany and this must have been a chunk from way off in bumfuckgarten, because the wall I remember was covered in graffiti. Unless they cleaned it, and in that case isn't it ruined like those furniture pieces people painted and brought on Antiques Roadshow?

Back to the traveling

We made Devil's Tower in about an hour. You remember the place from Close Encounters, and if not, here's a reminder: 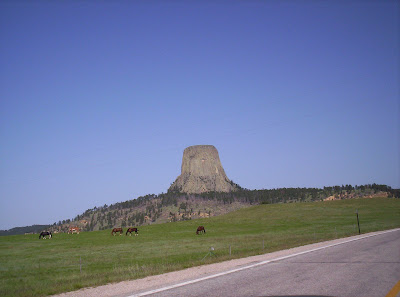 Sucks, right? No aliens or nothin' and those horses aren't even close to collapsing from anthrax. Quite a disappointment. If I had some capital, I'd open a UFO center up near the base of that rock, or at least a titty bar (shout out to EZ-OZ!).

On the way across Wyoming to Cody, you must cross the Bighorns, which are pretty tall mountains (10,000 feet). Getting there was a little bit of a hassle. Our outdated atlas led us on an hour and a half detour down dirt roads, such as this: 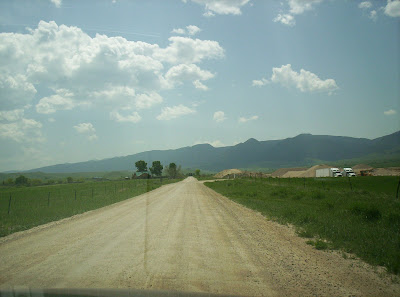 Nightmarish hell? You bet. Twelve miles in a Pigpen swirl of dust, the Civic Hybrid no likey.

The rest of the drive was amazing beautiful scenery (take my word for it Blogger is getting a little testy with the amount of pictures in this post), and a driveby of Medicine Wheel. Which we didn't even know was up there or what it was, really. I was kicking myself until I researched it at the hotel in Cody that night and went, eh, it's rocks in the ground.

Next time: The Exhaustion Pits of Jellystone

Anonymous said…
I am so loving your vacation commentary and pics. The description is so vivid, I can practically smell Caroline's vomit!! (the poor dear)

Seriously, thanks for the entertainment.

Mark Henry said…
In the next installment, we actually become zombies. I hear that's quite rare.
12:56 PM

Joe said…
Top 6 names for titty bars at the base of Devil's Tower:

Mark Henry said…
That's it. Thanks, I'm off to get a business license.