I do. But instead I'll just do it here and call it a day. Burlesque of the Damned reader, Heather has me thinking about horror films and recommendations. We played it out over at Zombie Chow, but I've been writing shit down ever since. Lists upon lists, but I'm in no way OCD.

I don't want to beat the dead horses of the apocalypse (Exorcist, Halloween, NOTLD), instead let's take a trip into obscurity, shall we? Here's a list of horrors I love, some for being truly scary in some way, possibly subtle, more likely not, others so bad they're good. Check it…

• Let's Scare Jessica to Death: '70s pseudo vampire classic, or is it? Is it Jessica?
• The Sentinel ('70s): Rosemary's Baby's trashy cousin in a creepy apartment building.
• The Gates of Hell (City of the Living Dead): Zombie/Lovecraft Mash-up with the nastiest vomiting intestine scene. Plus if I remember, fun with power tools. Here's the trailer:

• Near Dark: Best use of spurs in any film. Cowboy vampires, come on.
• Suspiria: Dario Argento, need I say more? Okay, the score will drive you insane.

• Silent Scream (80's): I don't know where you could find this, but, someone's in the wall!!!
• Dellamorte Dellamore (Cemetery Man): The dead have needs.
• Alone in the Dark: insane asylum loonies hunt the new doctor (who's that skinny guy from the A team!)
• Zombi 2: Fulci's zombie classic, not really a sequel but Romero's was retitled Zombi in Europe. 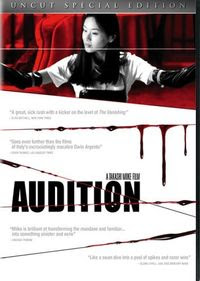 • Audition: kiri kiri kiri kiri kiri.
• High Tension: just how big are those rest stop bathrooms, Jesus!
• Dead Alive: Peter Jackson's gross-out piss yourself hilarious zombie flick, will make you say, "Lord of the what?"
• John Carpenter's The Fog (1980): Sure not the best movie, but second only to John Water's Female Trouble in memorable movie lines (I'm not ashamed to admit, I watch this three to four times a year).
• The Beyond: more Fulci. A film with so much atmosphere the plot becomes unnecessary.
• Pumpkinhead: I don't care what you say, that monster's scary.
• Cube: a little sci-fi but freaked me out. Here's a short trailer:

God, it makes me want to take a week of evenings and just stare at the TV. Do you have anything to add?