Some Movies, After the Fact…

As part of our Oscar catch up, we rented Babel, Half Nelson and Marie Antoinette. Loved the first two, but Sofia Coppola is getting on my last nerve. Just a question: Can Kristen Dunst actually act? Her sour face has maybe two expressions tops. Painful! But was the movie effective? By the end of the film, I was praying for someone to come in and kill them all (and yes I know how it turns out historically), but we are denied the brutality. Shame. 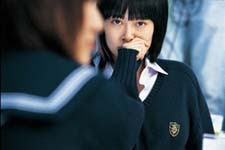 Babel rocked around its edges, the central story of a mistake deemed as terrorism is far overshadowed by Rinko Kikuchi's portrayal of a deaf girl grieving her mother's death and longing for love. Rinko rocks it naughty and we love her! The story of the Mexican nanny is at once heartbreaking and infuriating, shining a blinding light on the shortsighted American system. You want to jump in and garrot the border guards.

Finally, Ryan Gosling and Shareeka Epps are rock stars–one's a basehead, the other a dealer–and they earned those IFC Spirit Awards, five, ten, fiftyfold. Half Nelson was by far my favorite of the three. It took an original take on drug addiction and played that as merely a backdrop to a friendship. Made me want to take up crack! Joking?

That's all for now. It's snowing, dry, and sticking.