Okay, let's, for a moment, indulge my nature as a psychotherapist. We'll couch–no pun intended…yeah right–our discussion in the yearlong debate as to where the fault lies in the Brad and Jen divorce and the subsequent birth of Brangelina.

The Facts: Brad and Jenn were together and got married; Brad and Angelina made a horrible movie together (Mr. & Mrs. Smith) and spent their spare time fucking. Brad and Jenn lived through ugly public divorce. Brad and Angelina get together, marry, have babies of the rainbow variety. Jennifer Aniston is cannonized (St. Jenn). Most recently–today to be exact–David Arquette comments that it's all naughty Angelina's fault.

Alright. David Arquette can express his opinions on Jerry Springer with the rest of the folk who choose to misdirect their anger and live in oblivion. Which brings us back to the question: Whose fault is it? 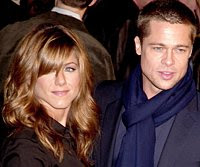 The answer, quite simply, is: It's Brad and Jenn's fault, dumbass. Affairs are the symptoms of problems within a marriage, not the problem itself. Usually the result of the husband (occasionally the wife) not being able to use his (her) "big boy" words and asking for something he wants (hot butt lovin'). We can infer that Brad and Jenn were not communicating well. Duh! Half the time these movie star couples work in different states and/or countries. It's hard to make a relationship work when your partner isn't around. It's hard enough when they are. It takes open communication. Expressing your thoughts and emotions. And, above all accountability, through working out your own shit.

A divorce is never the responsibility of the object of the couple's problems (Angelina), it lies entirely on immature human interaction (Brad and Jenn). Let's hope Brad does a better job communicating, this time.

Enough said. Or is it…

Mark Henry said…
It barely warrants the descriptor: movie. Bad chemistry, overused premise, and worst of all boring!
11:42 AM