Two top-10 lists in one month, what am I crazy? You bet, just wacky like that.
Here's what glittered on the tube:

What's going on at Barb's house? Rosie came in, took over, and the shit's flying like egg nog through the lactose intolerant. Bitch is for real, and Joy Behar's on board. Tune in to watch Elizabeth Hasselback squirm like a Junior League mom at a Slipknot concert.

After losing interest in Medium last year, I was surprised that Afterlife even came to my attention. A bit darker and a ton moodier than Patricia Arquette's portrait of a clairvoyant, Leslie Sharp takes us along on a more subtle supernatural trip. She is followed by a psychologist, her biographer, who isn't sold. The pairing is interesting, the faces are real, which is probably the most unnerving thing for an American viewer. 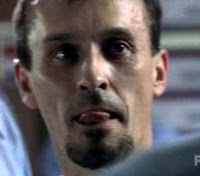 A friend of mine–naysayer that he is–questioned whether the show should still be thusly titled since prison has already been broke. I say: why the hell not? These characters can't stay out of jail for long. I tune in for T-bag (Robert Knepper, right), a nasty child-molestin' sumbitch, so creepy you feel dirty when you laugh at his slurs. Forget Cap'n hairplugs (Miller), T-bag's the real star! The second in command has to go to William Fichtner, after the disappointment of Invasion's cancellation, this kick-ass character actor jumped on for a thrilling season.

7. One Punk Under God (Sundance) 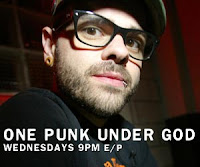 The rundown: Jay Bakker (Left), the son of Jim and Tammy Faye, has his own church, The Revolution, and some ideas that don't sit well with the Christian Right. I hesitate to call this a reality show; it's far too intimate. Let's call it an ongoing documentary. Jay takes us on a trip through time back to his childhood PTL days. Heritage USA as a ghost town is an insane metaphor for the Bakker family. You have to check this one out. Especially, for the heartbreaking image of Tammy Faye, struggling with stage four cancer.

Admit it! You watch, too. This show is just too cute. It takes me back to those '80s comfort shows, Fantasy Island, Loveboat. Peppered with just enough snarky nastiness and Salma Hayek to keep it current. The Mexican telenovellas that Betty's father watches are classic. 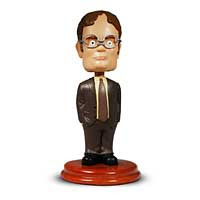 Jim's move to Scranton was–thankfully–short lived, and the addition of the new staff has been a boost to the insanity. This show is so dead-on in its roast of office culture, its become a litmus test for acceptable work friends. If they don't get the show, they are likely being mocked by it. You know you're working with an Angela–do you see the kitty mug on her desk? This show had to make an appearance on the list, if for no other reason than to feature my wife's favorite Christmas present (left), that's right–don't be jealous–it's the Dwight Shrute bobblehead, and it's the heavy kind. 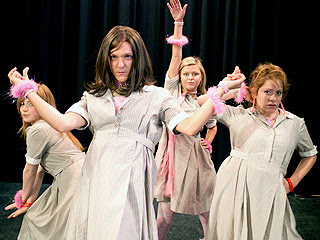 Chris Lilley is f**king hilarious as all 6 nominees up for the prestigious Australian of the Year award, in this bad-ass mockumentary. Among them are a man who saved several children from a bounce castle accident, the world's first eardrum donor, and a girl (right) who collects African sponsor children like Tamagotchis. My favorite: Pat Mullins, the cancer survivor and housewife, who's geared up for the most challenging "roll" of her athletic career.

Now you're messin' with a…a son of a bitch. Where else can you get Nazareth on soundtrack? That's right, Nazareth. Supernatural continues to pull off some hokey/scary storylines in its second season, with straight-faced Padalecki and the smirk glued on Jensen Ackles. We check it out for the kitsch value (the '70s rock tracks bust us up) and to fill the hole in our hearts left when Buffy faded away.

I thought it couldn't get any better, that the heart-stopping movement Sumthin' took on the floor, would for sure be the highlight. But, when New York from Season One came back, bitches, it was on. I almost think that this show is completely scripted. One woman actually prayed to God on her hands and knees to help her stop beating "this bitch's ass." Mark your calendars, January 8th, I Love NY debuts. Please be so kind as to take off your shoes and watch this mad shit right here… 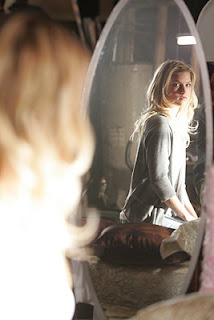 When was the last time your favorite TV character had subtitles? Oh…what was that? That's right, never. But Hiro does, and we love him (repeat that last part, aloud).

When previews for this show started to hit last summer, I was suspicious, looked great–so did Surface, where's that show? But I gave it a chance, and–Bam!–it's freakin' great, right? It's one of those shows that you can't wait to see, like Paper Dolls in the '80s (just kidding). It has been just as much fun finding out about each character's super powers, as it has following the storyline. We still don't know the full extent of some of their powers and that makes it, I think, really engaging, like burlesque a slow reveal that never goes completely bare.

Let's all hold our breath until it's back from winter break! You first…

Anonymous said…
ok..so I agree with some of the tv top ten..but not all of them...I hate the View..because of Rosie..Afterlife?? never heard of it..so that means it sucks.Prison Break?? fucking Oz on HBO was better and it had full frontal nudity which makes for better TV...so until I can see Wentworth Miller's junk...I am not gonna tune in. I do agree with Heros...I love the show. what about other shows??Charmed is still on in reruns...so is Buffy. What about the good shows?
8:03 PM

Mark Henry said…
Well, I don't acknowledge CMT or Lifetime so I guess I don't watch "good" shows.
10:17 AM