It's hard out there for a zombie.

Maybe moreso than for even people--I know that'll be a little tough to take, especially for those of you effected harshly by our sad economic climate. But think about it. With so many people out of work, hours slashed, or just worried about the future, spending their time at home because they can't afford to go out to dinner, a movie, or the bookstore, zombies are just shit out of luck. Why it's getting so you people will forego a frickin' coffee. 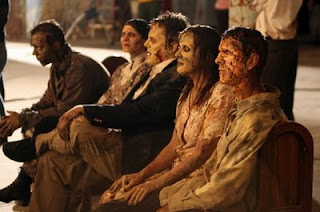 There's no one on the streets and the dead are piling up on park benches and on their friend's couches, insides growling with hunger (or the odd rodent).

It's a goddamn epidemic, is what it is.

Amanda Feral's feeling the brunt of bad economic decision-making, too, but she's got an answer to all the madness (granted not the most altruistic answer, but an answer nonetheless). A multi-faceted solution-focused plan to get people back on the streets and into the arms (and bellies) of their zombie friends (also to get people buying her second memoir, Road Trip of the Living Dead*)

It's a Zombie Stimulus Package, people! 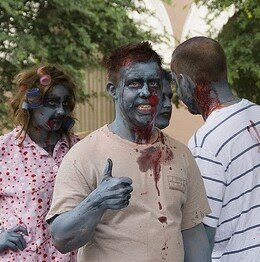 How's that, you ask?

You want to go out to dinner, but it costs so damn much that you grab a box of mac 'n cheese instead. That's a shame. With Amanda's plan in place, you have the opportunity to march your sad ass right on over to the Olive Garden, or the Outback, or even the Cold Stone Creamery (for you carb addicts). She may even spot you some gas money, or a coffee, or some such.

No, it is a contest!

First: Dinner and a movie!

You and your lovely date/sexual target can dine at a restaurant of your choice as long as it's either (Cold Stone Creamery, McDonalds, Outback Steakhouse, Bonefish Grill, Chili’s/On the Border/Maggianos, Damon’s, Uno Chicago Grill, Red Lobster, Pizza Hut, Baja Fresh, Cracker Barrel, Olive Garden, Cheesecake Factory, or California Pizza Kitchen) and doesn't go over the $50 Amanda's willing to load on the card (I told you Amanda's going through hard times). You'll also be on your way to see some fine cinema magic (at a Regal or AMC). A prize package totalling an ungodly $75! She might even be persuaded to throw in a signed Happy Hour, or a pair of her panties, in case you don't get lucky (Or Ricardo's for all you ladies out there).

Second Prize: Coffee and the Gas to Get There!

That's right, fuel up times two! You could win a Starbucks gift card and a gas card, too (as long as it's a station that Amanda can get to around here, Chevron, 76, Texaco, Shell, you know, big name ones). This prize package is worth a whopping $25 and ought to get you within bite radius of a few zombies, so...I mean, good times.

Amanda knows you people love your "urban fantasy," so she's unleashed her ghost writer on some of his peeps to gather up a basket, at last count there were 10 books in there. Some signed some not. Authors like Michele Bardsley, Dakota Cassidy and Jaye Wells are throwing in some of their own books and some of their favorites as well and no, obviously this won't get you out of the house, but you could promise to read them in a shady park, or under an overpass where you might be more readily accessible. That's...if you were a thoughtful person. What might it take to get in on this fantastically stimulating contest?

Simply, preorder a copy of Road Trip of the Living Dead, from an online retailer (like Mysterious Galaxy, Powell's, Amazon, Barnes and Noble, or Borders) or your local store (though that will require an additional step cuz you'll have to scan) and forward the receipt to Amanda...

I'll announce the winners on February 24th. For the rest of you, that's when you should start seeing books hitting store shelves, though it might be closer to March 1st, hard to say.

...and if you don't win, might I suggest simply taking more walks, alone, without weapons.

* For a taste of Road Trip of the Living Dead and an interview with said ghostwriter, Mark Henry (who loves to take all the credit), check out Tale Chasing for a virtual Reading! Chapter One to be exact.

HorrorBlips.com captures the latest news, features, and video across the Web for a community of enthusiasts and professionals. We'd like to automatically include your posts in our story index and increase your traffic. Just click here to claim your blog: http://horrorblips.dailyradar.com/blog/burlesque_of_the_damned/

Thanks for joining us.

If you have questions about the blog-claiming process or ideas for additional traffic-building tools, we’d love to hear from you.
9:20 AM